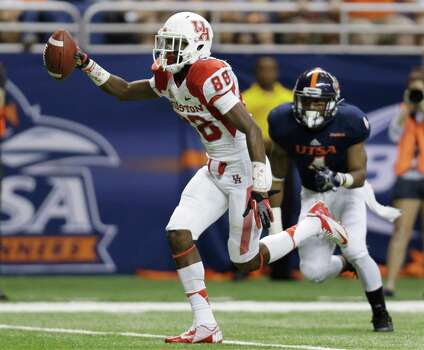 While Computer Prime was in the shop, the NCAA college football season got cranked up along with the first year of my Houston Cougars playing in the American Athletic Conference, AKA the rebranded Big East.

They went 5-7 in their last C-USA season and were picked in the AAC preseason media poll to finish sixth in the league.  But historically my alma mater has a habit of exceeding football expectations in the first year they enter new conferences.

So far it looks like that may be happening for this prepubescent Cougars football squad now.

Because they are building a $105 million 40,000 seat on campus football stadium on the former spot that Robertson Stadium used to occupy that isn't scheduled to open until next August, their 2013 home games are being played at Reliant, Rice and BBVA Compass stadiums.

The Coogs got this 2013 football party started with a 62-13 August 30 thumping of the Southern University Jaguars from the SWAC at Reliant Stadium.

The next week, September 7 they traveled to Philadelphia to make a little history and play the very first American Athletic Conference game against the Temple Owls at Lincoln Financial Field.

It was a tight and frustrating affair for the Cougars as they lost junior starting QB David Piland to a concussion and sophomore RB Kenneth Farrow to a season ending injury.

Piland's concussion paved the way for true freshman John O'Korn to take over the reins and his freshman counterpart Greg Ward to get some playing time.  The UH Air Raid offense moved the ball at will on the Owls until they got in the red zone, the Temple defense would stiffen and they would settle for field goals.  Cougar kicker Richie Leone kicked five field goals as they went an abysmal 1 for 8 in the red zone.

Been watching the Texans too much.

But the Cougar defense stepped up and got a red zone pick to end one Owl drive with them clinging to a 15-13 lead and stiffened on another drive that led to a missed 25 yard field goal that would have put Temple in front 16-15.   Ryan Jackson’s 8 yard fourth quarter touchdown run let the Cougars exhale and get out of town with a 22-13 win to go 2-0 on the young 2013 season and get their first AAC conference win.

The Bayou Bucket showdown at Reliant Stadium with our crosstown rivals the Rice Owls was next up on the schedule on September 21.  It was in addition to being John O'Korn's first collegiate start a game chock full of offensive fireworks as the Cougars found themselves trailing 13-7 after the first quarter before they woke up and grabbed an 17-13 halftime lead.

The Cougars built a comfortable 31-13 they took into the fourth quarter lead before Rice came storming back. 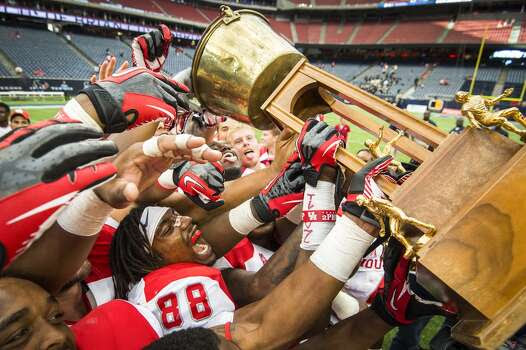 Alex Lyons picked up a blocked Cougar field goal attempt with 2:18 in the game fourth quarter and raced 62 years for a Rice TD to narrow the lead to a scant five points.   Rice kicker Chris Boswell subsequently executed a highlight worthy back-footed onside kick the Owls recovered to give them one last chance to bring the Bucket to their side of town.

But a fourth down pass from the UH 36 on that potential game winning drive fell incomplete and the Bucket remains on the UH campus for the third straight year after the 31-26 win over the Owls to go 3-0.

Because the Cougars and Owls are now in different conferences for the first time since 2003, that was the last scheduled game between UH and Rice for the next four years.  Both schools have indicated they wish to continue the Bayou Bucket rivalry which has occurred since 1971.

Yesterday the unbeaten Cougars traveled down I-10 west to take on the 2-2 UT-San Antonio Roadrunners at the Alamodome for the first time.

But this had the makings of a trap game.  The UTSA program may only be three years old, but it's headed by Larry Coker, who once led the Miami Hurricanes to a national championship in 2001.  UTSA sits in the second largest city in Texas and has quality high school programs in the area like Houston that produce lots of FBS caliber high school football players.  The Roadrunners recruited enough of them to where they went 8-4 last season and 3-3 in the WAC but because they are making the transition from FCS (Division I-AA) aren't fully bowl eligible until 2014.

For three quarters UTSA stayed competitive with the Cougars in a back and forth game in which the lead exchanged several times.  It unraveled in the fourth quarter for the Roadrunners when Cougars defensive lineman BJ Singleton blocked a Sean Ianno field goal attempt that Brandon Wilson scooped up and turned into a 79 year touchdown that gave UH a 31-21 lead.

It also turned a close game into a rout as the Cougars forced five fourth quarter UTSA turnovers including a 96 yard pick six with 48 seconds left in the game by William Jackson for a 59-28 win and remain undefeated in this 2013 football season.

Going to be interesting to see them trying to keep the forward momentum going in this inaugural AAC season with this freshman dominated squad.  .

Will be hoping they do.
Posted by Monica Roberts at 12:00 PM