I posted the information about an event that took place yesterday at Resurrection MCC and facilitated by Dexter Williams that was entitled 'Race Relations In The Houston GLBTIQ-SGL Community.

It cranked up a little after 3 PM on the Northwest Houston area GLBT church campus after the ground rules were laid out.  After an initial icebreaker exercise to give the facilitator an idea of the attitudes in the room, for the next three hours the 30 people who took the time out of their Sunday afternoon discussed the issue from a wide variety of perspectives.

We had a thoughtful conversation about the lack of visibility of Black people in local GLB and trans organizations, some of the racism we'd faced inside the Houston SGL community, and touched on the issues and challenges in our own community that contribute to the Black leadership void in Houston based GLBT organizations. 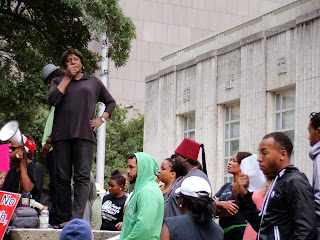 There were four people who identified themselves as biracial and brought their perspectives, and yes, I brought another angle to the afternoon's proceedings to the predominately Black gay and lesbian room as someone who experiences the issues of race in the H-town TBLG community from a trans perspective.  We were also fortunate to have a bi identified person in the room telling her story.

What I was disappointed by and not surprised at was that despite Dexter and the Brother 2 Brother organizers best efforts, out of the 30 people who felt it was an important enough topic to be there, there was only one straight white female ally in the Gathering Place room where it was held.   She happened to be a TransGriot reader who saw the announcement I posted earlier about the event on my blog.

Race relations in the Houston GLBT community is a topic I have tackled on this blog and we will have to have that discussion sooner or later in this community in order to move forward.  I believe there is an LGBT community, but race and class is a problematic part of it that must be addressed in order for it to move forward in our just human rights cause.

It's even more imperative that we clear the air about this issue in the Houston SGL, trans and bi community as we seek to emulate San Antonio and pass updates to our non-discrimination ordinance that add much needed gender identity and sexual orientation language to them.   We will need a united front for our multitracial coalition to take on the predominately monoracial Houston Forces of Intolerance who will do everything possible to stop that progressive GLBT ordinance from happening in the largest city in Texas.

Ignoring the festering 400 year old problem of race is not going to make it go away.  Just because we are part of the LGBT community doesn't mean we DON'T have those same race and class issues in our little subset of the greater American society that's infected by it.   To address it we have to talk about it so we can come up with a community based solution to it that everyone can be happy with.

We also need to handle our business on this subject so that Houston as the fourth largest city in this country with a sizable SGL, bi and trans community is better able to take its place amongst New York, LA, Chicago, Atlanta as a recognized major LGBT leadership center

I'm happy to report that Dexter and Brother 2 Brother are determined this won't be the last conversation we hold on this subject, and one is tentatively scheduled for February.   When there a solid date for it I'll post it to the blog, and I hope to see more of Houston's rainbow diversity reflected in that room when the next race relations discussion in the community is held.