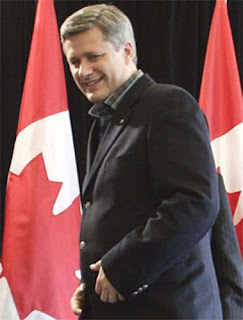 Our Canadian friends may be getting a new leader on December 8.

It was only a few weeks ago that the Conservatives and Prime Minister Stephen Harper received an expanded parliamentary majority in Canada's October 14 national elections. But because they fell short of the 155 seats they needed to govern on their own without interference from opposition parties, they are in a minority government situation once again.

Their opponents in the Liberal, the NDP and the Bloc Quebecois parties are loudly calling for change north of the border as well. They are gearing up to oust Prime Minister Harper by calling for a vote of no confidence on Monday unless an economic stimulus package to help Canadians facing their worst economic crisis in 80 years was passed immediately.

The opposition is pissed and was unified by a Conservative attempt to cut their $1.95 per vote federal political subsidies. They are much more dependent on them than the Conservatives and they saw it as a naked attempt to hamper their abilities to fund and conduct their next campaign.

Even though the Conservatives backed off of that ill considered plan, the opposition parties are not thrilled that the Conservatives aren't backing down from their plans to present an economic stimulus package as part of their fiscal budget plan in early 2009. 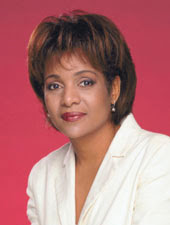 The Liberals, the New Democrats and the Bloc Quebecois command a majority of House of Commons seats and if the no confidence vote is successful in ousting Harper, the political ball then goes to Governor General Michaelle Jean's court.

She's cutting short a European trip to head back to Canada and was scheduled to return today. She'd have to decide whether to hold snap elections or ask the opposition parties to form a coalition government.

She's been working closely with her advisers and constitutional experts and stated from Prague, Czech Republic, "The prime minister and myself need to have a conversation. My door is open. I have to see what the prime minister has to say to me and what he is actually thinking of doing. I don't know exactly anything of his intentions yet."

Meanwhile, back at the Conservative ranch, the prime minister is gearing up for the fight to save his job. 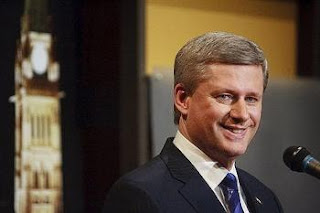 "We will use all legal means to resist this undemocratic seizure of power," he told fellow Conservatives at their annual Christmas party at an Ottawa hotel. "My friends, such an illegitimate government would be a catastrophe, for our democracy, our unity and our economy, especially at a time of global instability."

The Governor General doesn't share his assessment of the situation. "This is part of our democratic system," Jean said. "The role of the governor general is to make sure that our governance is on the right path. So as soon as I'm back I will fulfill my duties in total, sound judgment."

There's more drama in this political mix. Liberal leader Stephane Dion announced his upcoming resignation after his party's October electoral beatdown. Even with the loss, the Liberals hold the second largest number of seats in the House after the Conservatives.

Because they hold the largest number of seats in the proposed coalition, the job of prime minister in a Liberal-NDP coalition government would normally go to him. However, the Bloc Quebecois is opposed to making Dion prime minister, and the Liberals weren't planning on replacing Dion as party leader until their party convention in May.

So the Liberals have the problem of an unsettled leadership situation to throw into this political stew while they participate in negotiations to form the possible coalition government continue between the three parties.

It's going to be an interesting and nerve racking couple of days in Ottawa.
Posted by Monica Roberts at 4:44 AM

Thank you for a fine analysis! One thing in the first paragraph: that would be expanded minority, not majority, as you later correctly noted.

The $1.95 per vote subsidy was put in place under the Chrétien government when corporate and union donations were banned. It was about campaign finance reform. As it happens, the Conservatives are better at getting individual donations than the other parties are. Removal of the subsidy is a direct attack on opposing parties as well as on democratic principles of fairness. Stephen Harper isn't interested in fairness.

There were other proposals that did not go over well with the opposition, such as prohibiting public sector employees from striking (this after they had taken a very moderate pay raise).

I am very glad that the Governor General understands how our Westminster system runs better than the Prime Minister does. She is in a difficult position, but I'm sure she will handle it with her usual poise.

I did not know that the Bloc was objecting to Stéphane Dion as Prime Minister, although it's true there is no love lost there. That would be a fly in the ointment. Guess I'd better pay closer attention!

You realize that by writing about Canadian politics, you put most of your readers to sleep. :)

Veronique,
I actually find it fascinating.

Not much going on on our side except the President elect choosing his cabinet members, and even the right-wingers ain't hatin' on him about his picks (except the unhinged masses at Faux news)

Plus I looked at it as a challenge. ;)