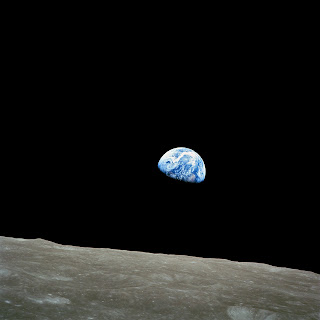 Merry Christmas to all my TransGriot readers around the world! This Christmas season also marks the 40th anniversary of the 1968 Apollo 8 orbital moon mission that produced this famous photo taken on December 24, 1968.

Let's strive to remember in 2009 and beyond that despite the times we fight like cats and dogs with each other, we are still one human family.

We also only have one planet, so let's take care of it. We ain't at Battlestar Galactica technology levels to where we can pack up and move to another one.

Posted by Monica Roberts at 9:51 AM

Same to you, Eileen..