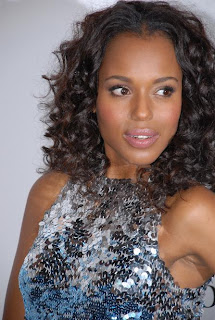 Beauty and brains is a combination that the women I admire share, and even if Kerry Washington doesn't think she is, most fellas have a dissenting opinion about it.

She also shares my brother's and my cousin's January 31 birthday. 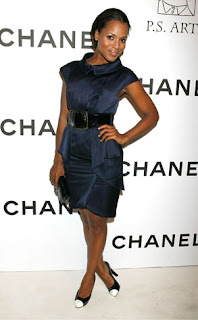 She's a three time NAACP Image Award winner, and if I wasn't impressed by her intellect before, I was even more so when one night I watched her take on two conservatives on Bill Maher's HBO show and more than hold her own in the debate as an Obama supporter. She's also testified in front of Congress as well on behalf of the Foundation for the Arts.

She's also playing a transwoman in the upcoming movie Life Is Hot In Cracktown, and had LA transactivist Valerie Spencer as an advisor on the film to ensure she was accurately portraying her role.

I'm curious to see how she'll pull it off, and if it's anything like the other projects she's participated in, I shouldn't be disappointed.

Hopefully one day Kerry will be collecting her own Oscar one day instead of playing beside Oscar winners.
Posted by Monica Roberts at 3:23 AM

THIS just set off something in me:
'She also shares my brother's and my cousin's January 31 birthday.'

brothers...and cousins huh? i'm single you know....i MIGHT have to show up at your family reunion just to SEE what is going on....as far as single men in your family - LOL

My single male cousins probably wouldn't object to that ;)