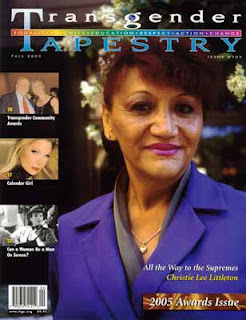 For several years the IFGE convention was managed by a group called TransEvents. While IFGE focused on its nuts and bolts educational mission, TransEvents, founded by S. Kristine James and Alison Laing organized and ran the convention.

IFGE is the International Foundation for Gender Education, one of the oldest national gender groups in existence. It publishes Transgender Tapestry magazine and is the creator and presenter of the Trinity and Virgina Prince Awards honoring the transgender community heroes and sheroes.

It has come to my attention thanks to a Phyllabuster I recently received that a split occurred a few months ago between IFGE and TransEvents. As of yet no one knows why, but I'll have to contact my sources inside IFGE to get their side of it and hopefully hear from someone representing TransEvents as well.

The official IFGE convention has already been scheduled for February 2-8 2009 in Washington, D.C.

But that split will lead to an additional transgender convention in 2009. The TransEvents folks are putting on what they are entitling Transgender 2009-The Liberty Conference that will take place in Philadelphia from April 30-May 2.

If I had to pick one, the IFGE event appeals to me on multiple levels. I am a Trinity Award winner who enthusiastically supports the education mission of IFGE, and I occasionally write pieces for publishing in the pages of Transgender Tapestry magazine. Supporting this conference helps IFGE continue that mission.

Being in the Washington DC metro area gives me the opportunity to hit Capital Hill while I'm there to lobby the new 110th Congress on an inclusive ENDA and hare crimes issues. But conversely, since those bills haven't been filed yet, until I get a bill number and actually see how it's worded, it's hard to lobby for a bill you haven't seen yet.

The Philly event would allow me another opportunity to visit the city, hang out with Dionne, engage in more stimulating discussions with her and chat with Alison Laing again.

But judging by the separate conferences for this year, unless some behind the scenes conversations are taking place between the two parties I'm not cognizant of, it looks like the IFGE-TransEvents split may be a permanent one.
Posted by Monica Roberts at 10:10 AM

Monica, you won't remember me but we've met. I became disillusioned with many of the organized LGBT events when I found that things which seem 'clean' on the surface were often quite dirty underneath. Too often the business relationships in these events are not made by seeking the best for the job, but by quietly letting the organization get ripped off by awarding the job to someone's friend who isn't doing the job as well as it could be done. The sums of money can be large and the relationships disguised, but doing enough digging reveals the truth. That begs the question of why does the truth need to be hidden? Isn't deceit dishonest?

The bottom line is that deceit is always wrong, and all deals should be wide open for inspection by the members of the organization who should care enough to look into them. I don't know about this situation but I wouldn't be surprised if the IFGE didn't have some of this kind of thing going on too. If the split is because the IFGE is trying to do what is best for itself then I'm all for that. If someone is angry that they lost their supposedly locked-in job because someone else could do it better then they were the problem all along. I firmly believe that business decisions must be made on business grounds alone. If a friend can do it best then let them. If they can't, then I'm sorry but it's totally unfair to the organization to continue a bad business deal. Helping one to the detriment of many others like them just doesn't wash in a sane mind.

While I am for more events, I am not for creating one that is going to divide people or force people to decide between one or the other. Time and open-minded digging will reveal the truth here and show if there was somebody who did something wrong. I hope this isn't the case, but if someone was wrong and they won't see the error of their ways, then should we continue to support them and allow their kind of thinking to continue unabated? Like it or not I think we all know the right answer to that one. Honest openness isn't always pretty but it is always right.

I'd like to know what caused the split myself.

from what I know, Monica, the split was entirely due to the conference planning: IFGE decided to have a conference in DC in February, instead of having the usual conference, in April in Philly.

The Trans Events folks wanted to keep a conference going in the PA area, and keep it to April.

They TE people are still helping organize the IFGE conference, though, too.