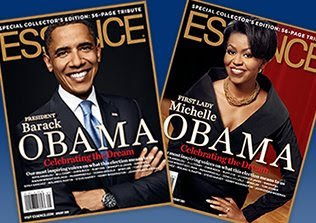 January 20 is already circled on our 2009 calendars thanks to the upcoming inauguration of our first African-American president. As that historic day approaches anything that has the president elect's picture on it is rapidly disappearing off book shelves, store shelves and magazine racks.

Coming soon to a magazine rack (or your mailbox if you subscribe to ESSENCE) on December 12 are the historic covers for the January 2009 issue of the magazine. There will also be a 56 page tribute to our soon to be 44th president and the First Lady.

I'm willing to bet that those magazines will probably sell out quickly like everything else Obama has graced the cover of since November.

Shoot, that reminds me, I need to renew my ESSENCE subscription ASAP.

While you're waiting for January 20, enjoy the 60 Minutes interview.
Posted by Monica Roberts at 11:54 PM