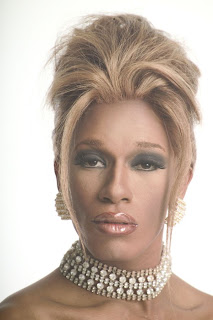 While there are many African-American transpeople like myself whose stories are just beginning to be told, I can't forget the African-American peeps who are crossdressers silently in some cases sorting through their issues.

Unlike some transpeople who wish to forget they ever were and even hate on crossdressers, I and others don't. It was that period in my life that helped me sort out that I was truly transgender and it wasn't a passing phase.

While crossdressing and transsexualism may seem similar on the surface in terms of the clothing issues, the reasons we wear them are separate and distinct.

The major difference between a crossdresser and a transperson is that many enjoy their birth gender and wish to remain card carrying members in it, we don't.

But just as there are many flavors of transpeople, there are also variances in the crossdressing community as well.

I stumbled across an interesting site belonging to Zoe, who tells her story.

Genevieve has been telling her continually evolving story in her blog The D Line since June 2005.
Posted by Monica Roberts at 1:43 PM

I would like to see cross-dressing as a positive example of moving beyond rigid gender roles. While it does seem to risk reducing transgenderism to a 'mere' fetish, hopefully it encourages people to consider a more complete view of themselves that incorporates masculine and feminine elements as they see fit. I would really like to see all these gender roles broken down since they only serve to limit people.

Does anyone have any recommendations for good literature or documentaries on the complex world of crossdressing, drag queens, transgender, genderqueer, etc?

I am writing a piece in which I'll post here later this month about the use and misuse of the gender binary system.

Eddy, if you go to my blog there are listings of some books and sites in which you can research. I will add more in the subsequent days.

Monica, thank you for the compliment. I love reading transgriot and it has helped and blessed me tremendously.

Genny, glad to know TransGriot has helped you and others.

Thank you for having the courage to tell your story and give us some insights on what it's like from the CD spectrum of the transgender rainbow.