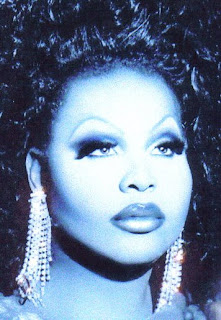 Over the years I've gotten to know some wonderful people who are part of the female illusionist and pageant sectors of our community. Many who live full time have turned out to be not only beautiful human beings inside and out, but I've had some fascinating conversations with them.

Unfortunately, that's not always true with 'errbody' in that world. I'm turned off by the anti-intellectual strain exhibited by a minority of peeps in that world, and the horror is that some are proud of it.

What brought on this post was seeing the photo of Chevelle Brooks I posted and remembering a benefit show I attended for her at Incognito, a Black GLBT club back home a few years ago. I was invited by Chevelle's mom to attend, and it was to help her raise funds to compete in a looming Miss Gay US0fA pageant.

That particular night I wasn't feeling well and had a slight temp, but I felt like I had to be there to support Chevelle and her mom, so I dragged myself out of bed, got dressed and made the beeline to the edge of downtown where the club was located.

Sophia McIntosh was the MC of the show and living in Dallas at the time. It was being held during the time (1996) the Oilers were fighting the city and then Mayor Bob Lanier to be let out of their Dome lease so they could move to Nashville.

Sophia cracked a joke about losing the team, which didn't sit well with me and a few others in the crowd because it was a sensitive, emotional subject at the time for us. The Dallas-Houston rivalry being what it was, the fact that someone living in Dallas brought it up only added to the pissivity. Being the militant 'I hate the Irving Cowchips' Oilers fan I was, I spoke up and pointed out that the Oilers were still bound by that lease to play in H-town until 1998.

You know how illusionists don't like to be upstaged, so she retorted, "oh, you one of them smart b*****s. Okay, if you're so smart, who was the president of the United States in 1964?"

"Lyndon Baines Johnson," I quickly replied. "Took over after Kennedy was assassinated on November 22, 1963 in your city and won election in a landslide over Barry Goldwater in 1964."

The crowd whooped it up and hollered, and after she made a lame joke about my hair and was satisfied with the laugh she got out of it, on the show went.

We actually had a nice wide ranging conversation backstage after that, and she confided that most people in that room sadly didn't know half of what I articulated in my response to her.

Anti-intellectualism is not just a GLBT problem, it's a societal one as well. As I've said repeatedly and should be evidenced by the posts here, I was blessed with God-given intelligence and have no problems flexing my intellectual muscles when necessary. And yeah, I'm proud of it.

One of the things I was adamant about before I transitioned was that I wasn't 'dumbing down' for anyone. Love me or hate me, one thing peeps can consistently say about me is 'that girl's smart.'

I'll take that any day over someone whispering behind my back 'that girl's stupid'.
Posted by Monica Roberts at 12:45 PM

that girl IS smart. there is NO denying that.

As a future educator, I have seen the results of "dumbing down" on children. My father used to say to me that you have the "intellgent few and the ignorant many."

I'm working on my mster's degree and just started a business. I love intellectual challenges.

You ARE smart. That's why your blog is a irresistible read for me. I love smart b****s. :-D

And I hope I never disappoint y'all either ;)

I love this blog! And that's because of the wicked smart person who writes it. Got no use for dumbing down. On to a great 2009!