2008 TIME Magazine Person of the Year 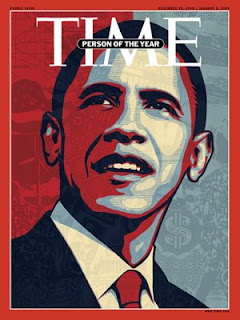 If you had any doubt who TIME Magazine would choose as their Person of the Year, now you know. The runners up for the honor were Henry Paulson, Sarah Palin, French president Nicholas Sarkozy and Chinese director Zhang Limou.

Since 1927, TIME Magazine has chosen a man, woman, or idea that for better or worse, has most influenced events in the preceding year, and there's no doubt that the soon to be 44th president of the United States has definitely dominated this year news wise.

It was definitely his year in more ways than one, and I can't wait until January 20.
Posted by Monica Roberts at 7:28 AM