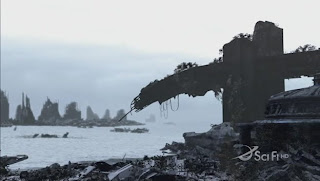 Battlestar fans like myself have been impatiently waiting for the final ten episodes of our favorite show to come on next month.

We're anxious to find out who, what, how, and what time period Earth got fried to a nuked out crisp, but who the final Cylon model is among all the other questions raised during the four season run of the reimagined BSG.

In the interim, the news for BSG's spin off prequel show Caprica is beginning to trickle out.

I posted a few months ago about Caprica being greenlighted as a two hour pilot and a series with 18 one hour episodes for the first season. The casting for the various roles has begun or been completed and the trailer has finally been released.

It looks interesting to say the least. The show will kick off with a two hour special, then the series will go into production for a projected debut of 2010. 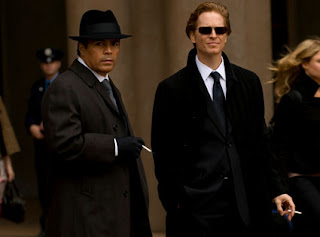 Unlike BSG, the Caprica action is going to be planet based. More details of the basic storyline have been divulged

It will follow the lives of the Graystone and Adama families 51 years before the events of BSG. Wealthy technologist Dr. Daniel Graystone (played by Eric Stoltz) and civil rights attorney Joseph Adama (played by Esai Morales) cross paths when their daughters die in a religious terrorist attack initiated by Zoe's boyfriend Ben.

Zoe Graystone inherited her dad's technological smarts and as kids do, one upped them. Before she died stored some of her rudimentary personality elements and DNA into an avatar of herself called Zoe-A. The grief-stricken Graystone discovers them, takes these basic building locks, some stolen technology from a Tauron rival and uses cybernetic breakthroughs to create a robotic copy of his daughter called Zoe-R, the first Cylon. 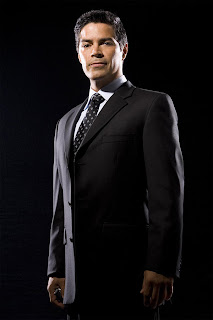 Joseph Adama has overcome his Tauron roots and Caprican prejudice against non-Capricans to become a hugely successful civil rights attorney. He lost his wife and daughter Tamara in the same attack, and Graystone creates a robotic copy of Tamara for him as well.

But ethical and moral concerns about the questionable directions Graystone is taking these cybernetic experiments lead Adama to become a vehement critic of the Cylons.

It is a sentiment passed down to his son, William, the future commander of the Galactica.

As many sci-fi fans know, today's science fiction sometimes becomes tomorrow's science fact. The ethical and moral questions raised on Caprica will probably be some of the same ones our own society will have to sort out soon.

Thanks to ongoing research in robotics and the increasing exponential knowledge gained about our DNA from the Human Genome Project, we are probably close to or soon will have the ability to create our own versions of Cylons.

But we'll get the pleasure of watching it being hashed out on a weekly basis thanks to the executive producing team that brought us Battlestar Galactica, Ron Moore and David Eick with 24 writer Remi Aubuchon.
Posted by Monica Roberts at 11:56 AM