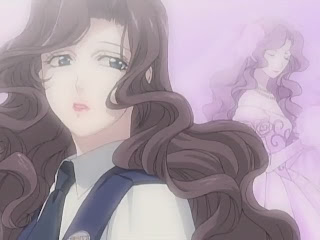 I've had the pleasure over the years of meeting now Lieutenant Stephan Thorne of the San Francisco Police Department (congrats Stephan on the promotion) and hanging out with TOPS founder Tony Barreto-Neto during the 2000 IFGE convention in Washington DC.

But my favorite transgender police officer is Sgt. Aoi Futaba of the Tokyo Metropolitan Police Department.

Aoi was a former star high school basketball player in Japan with many female fans and after joining the force worked on the vice squad. 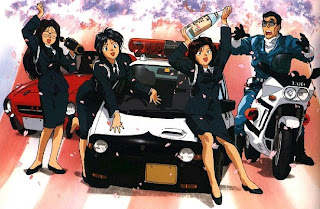 She crossdressed as part of an operation to catch a serial rapist, and after the case was successfully concluded she realized her body may be male, but her spirit was female and continued to dress and live as a woman full time.

She transferred from Vice to the Traffic Division soon afterward and ends up at Bokuto Station. After a rocky beginning, Aoi's new coworkers at Bokuto Precinct fully accept her, even with the knowledge that she wasn't always female.

By the way, did I mention that Sgt. Aoi Futaba is an anime character?

Some of you may have figured out either by the photos or the initial paragraph I wrote that I'm talking about the anime series You're Under Arrest. While the show is focused on the exploits on and off duty of Sgt. Miyuki Kobayakawa and Sgt. Natsumi Tsujimoto who are this anime police show's Cagney and Lacey clones, Aoi is the far more fascinating character on it. 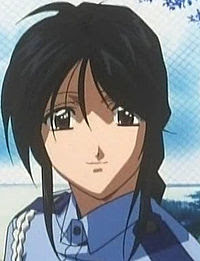 Miyuki correctly observes during their initial meeting that Aoi is more feminine than any genetic woman in Bokuto Station by saying to her after she explained her emotions and thoughts leading to her transition, "You're the daughter my mom always wanted." During the first and second season her observation proves to be right on target.

You have the embarrassing situations centered on Aoi's pre-op status in various episodes, but over time she not only proves to be a valued officer at Bokuto Station, she simply becomes 'one of the girls.' Even Yoriko Nikaido, the nosy Bokuto station dispatcher and scheming gossip who had a major problem with her at first using the women's locker room eventually warms to Aoi and becomes her patrol partner. 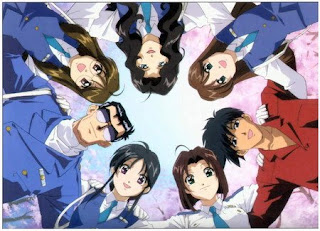 It's interesting to note that Aoi realistically mirrors many of the emotions, concerns and problems that many transgender people face. She faced the bathroom issue in the very first episode that chronicles her character's initial arrival at Bokuto Station.

There were two episodes in which she faced the 'When Do I Tell Him' dating dilemma. She had to decide when to disclose to a handsome and famous actor she was attracted to and who showed romantic interest in her that she was a transwoman. The other episode chronicling Aoi's dating dilemma focused on her anguish about meeting a man she'd become romantically involved with via the Internet and revealing her secret.

There was also the You're Under Arrest-Full Throttle episode in the third season in which her old superior in the vice department Udamura Kumanosuke felt responsible for her transition because of those crossdressing missions and showed up at Bokuto station with the announced intention of turning Aoi back into a man. After the failure of the remasculinization plan, his wife pointed out after meeting Aoi that she was always female and that was her natural predestined path to travel.

Even one of her female fans in the first episode who'd developed a crush on the pre-transition Aoi in high school and treasured the pair of old basketball shoes she was given by Aoi eventually realized the same thing.

So yes, she's my favorite transgender police officer, at least in the anime world.

As for my favorite transgender police officer in the real world, I'm pleading the fifth on that.

Posted by Monica Roberts at 1:56 AM

One of the characters in the video game Persona 4 is in the FtM spectrum. At one point, the game pulls the Thomas Harris defense ("she's not *really* a trans* man! She just thinks she is!"), and once the other characters find out that he "is really a girl" he gets she-d (in the English translation) the rest of the time. Bleh.

I haven't even started his Social Link yet (where the player develops relationships with other characters and slowly learns more and more about them, as well as getting more powerful). Also, there are little hints that the Thomas Harris defense is wrong. While the other characters call him "she" and "her" in the English translation, at least one continues to call him "Naoto-kun" rather than "Naoto-chan." And even then, if he gets "Naoto-chan" at all it's *very* rarely...like once or twice.

While Naoto's portrayal is far more cissexist than Aoi's sounds, he's definitely one of the most interesting characters in the game (and they are *all* interesting). And he's a detective, too.

Interesting...I'll have to run that by my resident anime expert.