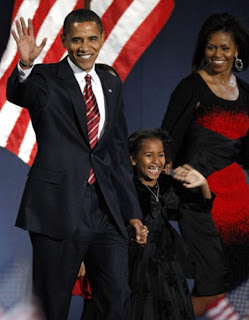 
Okay, I'll say it. I was wrong. And I'm saying it with a wide as Texas smile on my face. 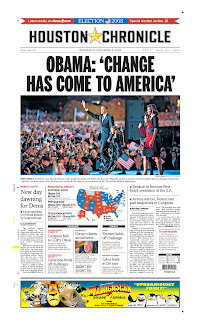 What my people have been hoping, dreaming and praying for to happen for almost 150 years has finally come true. We have an African-American president.

Come January 20 the White House will have occupants who share the same heritage as the people who built it.

He didn't just squeak by. It was an electoral college blowout. He garnered 61 million votes, the most in US history. The victory was especially sweet because he also exorcised the ghosts of Florida 2000 and Ohio 2004.

In one fell swoop the election of President-elect Obama (God, I love the sound of that) has begun the repair the damage to our country's international good name severely damaged by the Bush misadministration. 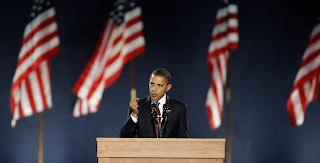 It's a history making election on a lot of levels, and one which I and a lot of people around the world will be celebrating for a while. I cried when he hit the magic 270 mark at 11 PM EDT and thought about how my late grandmother would have loved to have seen this. 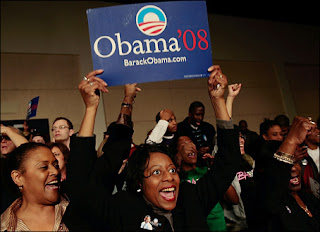 We African-Americans were dancing in the streets last night. We were joined by our fellow Americans and people around the world. We're standing a little taller and smiling a lot wider this morning.

I'm happy that on my niece's ninth birthday she'll get to witness the inauguration of our nation's first African-American president.

And so will I.
Posted by Monica Roberts at 4:08 AM

There's a lot of work ahead, as the President-Elect warned in his acceptance speech, but now we have hope that the work will bear lasting fruit.

I like the sound of "President Obama" even more. :)

Goodmorning to you Monica.

I have been registered to vote ever since I turned 18 years old. Now at the age of 34, my voting record now has a blank for the year of 2008.

As a black transwoman, before this election, I just new that I was going to vote, and also new my choice was going to be Obama. However I sat at my computer, went to CNN, and watched the election unfold withoutout casting my ballad.

Why some ask, well the reason is simple. You were correct in your first post Monica. There is no need for you to say you were wrong. America just as you stated will never put a black/African American man in office to serve as leader of the free world. Obama is Kenyan, and he has a white mother.

You see now American whites feel as if this move will vendicate hundreds of years of slavery, and the atrocities that they have done to our people. And yet, they still can't even get that right. They still did not put an African American in office. They put a Kenyan in office.

When I saw Jesse Jackson crying, I almost cried too. Not for the same reasons however. I cried, becuase America rejected a real black man who was standing side by side with MLK, and fought for our struggles and opportunities that Obama is benifiting from right now.

So that is why I decided not to vote. As far as I am concerened, I am still waiting for my first African American president.

Monica, big hug for you! (((Monica)))
Wonderful remarks, sweetie. I am so overwhelmed and the darn tears keep coming. I can hardly wait until Jan 20th.

But considering all of that, I can still say, that I never KNEW (sorry for the earlier typo) America would put any person in office who is blessed with melanin.

So either way we look at it, it is still an advancement. I am just saying, that he is not African American, such as a Jesse Jackson, or other African Americans who have ran for this office, that this country has looked down upon.

Well none the less congrats to you Monica, and all those who have supported him through this long electorial process.

As for me, the cork in my champagne bottle is still waiting for one of our own to get into office.

Eboni,
I respectfully disagree with you. He, like us is still a child of the African diaspora. His wife is an African-American along with his daughters and he embraces our community.

So yes, he is an African-American.

While I understand you and some people in the community who feel the way you do would have loved to have as y'all see it, an
African-American descended from someone who survived the Middle Passage (say a Jesse Jackson, Jr) run and become the breakthrough candidate.

As you correctly noted, the legacy of some white who hate on the Civil Rights Movement precludes that at this time.

But Obama's election Eboni opens the door to that possibility, especially if the Obama Administration does a bang up jb of running the country.

Actualy my type of reasoning is in the greator minority among African Americans. And even those who believe as I do, unlike myself, still went out and did their civic duty as Americans.

I just feel that we as African Americans in no way should feel that this is vendication for the hundreds of years of abuse in this country.

The difference of our expierience in this country as African Americans, is that our diaspora was not a choice. You see, I too agree that he may be fond of our community, and did indeed take an African American as his wife, but the truth remains, that I feel we are not at the point where a "middle passage" president is ready to take the helm in the eyes of whites.

I personaly feel that we as a country are not past post racial canidates. I feel that we greatly still think of race in America.

However what bothered me last night, was that CNN kept reporting that he was African American. In order to wear that badge (AA), one must have lived our struggle, and bled the fight such as a Jesse Jackson. Trust me monica, if he ever signed any college loan applications or grants for school, I can almost gaurantee you, he never checked Afro American.

But hey as a college student, if he did check Afro American, he would be the first African I have ever met on campus who has done so.

I do not want to be a party pooper. I just know that this blog supports all view points as a voice to be heard on the various subjects posted by our friend Monica.

Look I have bigger probelms in life. I am a pro black transexual.

You're not alone in feeling that way, Eboni.

You know I have much respecxt for Philly after y'all booed America's Next Right Wing Model off the ice. ;)

And you know what, FOX News did not even make one peep about it. They definetly tried to keep that quiet.

Oh Monica, I know this is off topic, but have you written any books? And if not, do you plan to in the future?

Thinking about it....I do have three novel manuscripts I'm working on