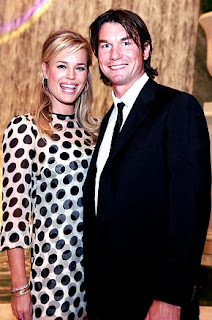 With all the various events going on in the last few weeks including the historic presidential election, I forgot to post my congratulations to our honorary transwoman Rebecca Romijn, who is expecting twins sometime this winter with her hubby Jerry McConnell.

As many of you TransGriot readers know, Rebecca plays transwoman Alexis Meade on one of my fave TV shows, Ugly Betty. 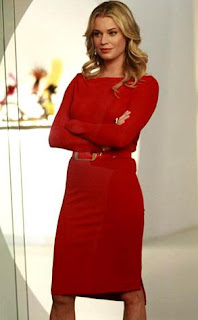 The way they've explained Alexis' hiatus on the show writing wise is that she fathered the French child originally thought to be Daniel's pre-transition (y'all are gonna have to get with the program and catch up) and has taken a leave of absence from Meade Communications to jet off to Paris and spend quality time with her son.

Her son's mother was a French model who died and left instructions in the event of her death to find the Meades.

I hope that she reconsiders leaving the show and whatever drama between her and the new writing staff gets squashed. I'd love to see more of our honorary transwoman strutting through the halls of the Mode building running thangs in future seasons.

Shoot, the entire cast on that show rocks.

And yes, I did say 'honorary transwoman'. She considers herself a friend of the community and backed up her words with her actions. 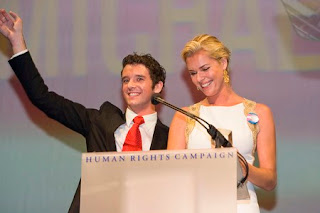 When a group of us protested last year's Washington DC HRC dinner in the wake of the ENDA backstabbing, Monica Helms passed a 'Transgender Pride' button to one of our allies who was going inside the convention center to attend it. That ally promised they would get the button to Rebecca, who along with Michael Urie was there that evening to accept an award on behalf of the show.

When they appeared onstage to accept it, Rebecca was wearing the button.

Rebecca has also made it clear that she wanted to portray this role as accurately as possible and even consulted her transgender girlfriends on how to do so. It clearly showed in the performances she gave during that first season that she (and the previous writing team) got it.

So congratulations, Rebecca. May you and Jerry's twins be born healthy and may life continue to bring you both much happiness and success.
Posted by Monica Roberts at 12:47 AM