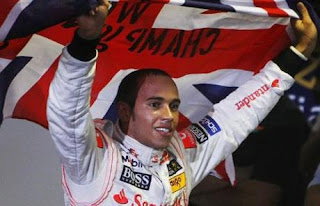 Unlike my roomie Dawn, I'm not a rabid fan of Formula One racing, but I do appreciate it when anyone of African descent makes history as Lewis Hamilton did today.

After barely missing becoming the world driving champ last year in his maiden F1 season, British driver Lewis Hamilton not only became the youngest Formula One world driving champion at age 23, he is also the first person of African descent to do so. I thought it was also fitting that he won the title in dramatic fashion at the Brazilian Grand Prix in Sao Paulo.

Brazilian homeboy Felipe Massa won the race for the second time in his career (previous win 2006) and thought he'd clinched the world championship at his hometown Interlagos track with his sixth victory of the season. With Massa's win Hamilton's margin for clinching the title shrank from finishing no worse than eighth place to fifth. 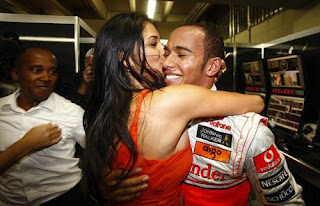 Hamilton had won five races this year including the British Grand Prix, but unfortunately was languishing in sixth place on the final lap before he passed Germany's Timo Glock on the last corner to finish fifth and edge Massa by one point in the overall F1 standings 98-97.

Congratulation to Lewis Hamilton and may he win any future F1 driving titles with less drama.
Posted by Monica Roberts at 3:34 PM