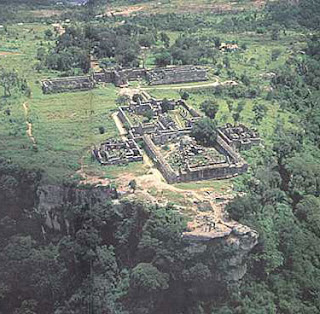 If you're wondering why I haven't done a post yet about who won Miss International Queen 2008, the reason is because the pageant won't be happening until October 2009.

It's been affected by a double whammy of political unrest and a border clash between Thailand and Cambodia near the 11th century Preah Vihear temple.

Which country claims it has been a source of drama between Thailand and Cambodia for decades. The World Court awarded it to Cambodia in 1962, but the sovereignty issues over some of the land around the temple were not clearly resolved.

UNESCO approving Cambodia's application to designate the temple a World Heritage Site led to July 15 troop deployments by both nations along the disputed border. Despite a late August troop pullback, a brief gun battle broke out between the two sides in October which ended up with one Cambodian and two Thai soldiers wounded. 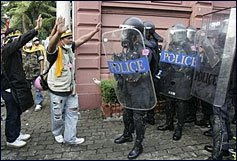 In addition, the political tension in Thailand between the People’s Alliance for Democracy (PAD) and the People’s Power Party-led coalition government has ratched up to armed confrontation levels between protesters and riot police. An October 7 demonstration resulted in one person killed and several injured.

While the political turmoil has largely been confined to the capital of Bangkok and the border situation is quiet for now, some of the collateral damage has been felt in Thailand's tourism industry, which contributes (depending on what stats you read) 6% to 14% of GNP to Thailand's economy. 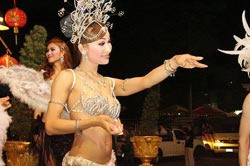 It has also been felt 110 kilometers away in the resort city of Pattaya, home to the Tiffany's transgender cabaret shows and two of the best known transgender pageants on the planet.

Due to the travel warnings that several countries have issued since the October 7 clashes between police and protesters in Bangkok and the border clash with Cambodia, Tiffany's Cabaret, which usually has no problem filling its 2000 seat auditorium for it's world renowned show, has seen its business drop 50%. 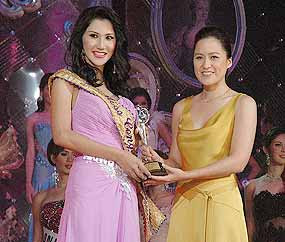 Alisa Phanthusak, (right in photo) the organizer of the Miss Tiffany’s Universe and Miss International Queen pageant and whose family owns Tiffany's Cabaret, admitted feeling “terrible” that the international pageant had to be “postponed”.

“But we had to take this painful decision because international tourist arrivals dropped after the government declared emergency rule (on Sept 2, after a Thai was killed when anti and pro-government groups clashed on the streets of Bangkok) and several countries advised their citizens not to travel to Thailand,” she explained. 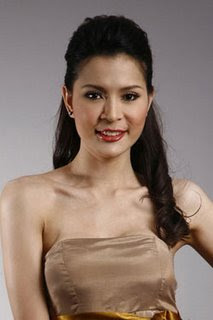 The Miss International Queen 2008/2009 Pageant will take place next October, presuming the political unrest has settled down by then. This year's Miss Tiffany winner Kangsadan Wongdu­sadeekul will represent Thailand alongside Miss Tiffany 2009.

While Miss Tiffany 2008 is disappointed she won't get to compete this year against the world's best transwomen pageant contestants, she's looking at it with glass half full optimism.

“She feels the postponement will be an advantage, as it will give her time to improve her English, looks and outfit.” she said through a translator.

Hopefully, they will hold an election in Thailand soon to sort out the political drama, and cooler heads will prevail and hash out an amicable settlement between Thailand and Cambodia over the disputed border area.

I not only don't want to see any more drama and bloodshed over those two issues, it would be nice to see this pageant finally take place.

To paraphrase the old Thai proverb, even though the elephants are battling, the ants don't deserve to get squashed.
Posted by Monica Roberts at 5:35 AM