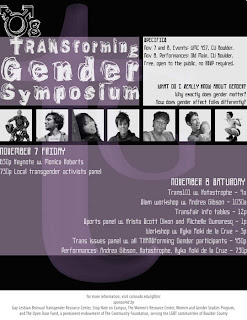 Hey people. Still in Boulder checking out the conference and will be heading back to the Bluegrass State tomorrow. I almost don't want to leave, it's so beautiful out here and on the CU campus.

Got a chance to walk around it yesterday. It is so close to the mountains. Was a little windy yesterday, but has calmed down today.

My keynote speech was last night and I'll post the full text of it later. I ended up having to cut a few pages. I always worry about not having enough speech to cover my allotted time, but it turns out I tend to have far more speech than time to deliver it.

Still getting compliments for it, so as long as the people attending it and the wonderful people who brought me out here liked it, then it's a success. I've also had fun meeting some of the CU students who read TransGriot and getting to know some of my fellow panelists.

Still tripping about how fast the fallout over the Prop 8 loss turned racist and ugly, spurred on and stirred up by Rush and his conservafriends. I wrote a post about it on Bilerico called 'Fallin' For The Okey-Doke' that I haven't checked for nasty grams yet.

While I'm saddened and disgusted about the Prop 8 loss, instead of getting pissed off at African-Americans in general, the GLB community needs to remember who the real culprits are: the folks who put this up to a vote in the first place.

Hope the GLB community remembers this and how they felt the next time they hear one of their own suggest that transpeople need to be cut out of ENDA.

On my lunch break before my 4 PM MST panel discussion, so I'm gonna rustle up some food. The hosts were feeding me, but its vegan fare and y'all know I like my beef.
Posted by Monica Roberts at 1:18 PM

I was a your panel yesterday, and just wanted to drop in and say that it was great to hear you speak -- I'll miss the rest of he conference, but will definitely be keeping up with your blog.

Thank you.
I was honored to be invited to participate and hang out on the CU campus for the weekend.