Nelson Mandela's Letter To Our President-Elect 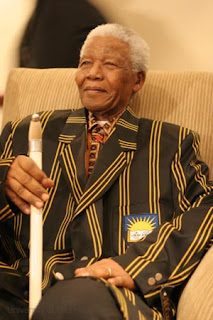 TransGriot Note: I've been comparing this historic election of our first African-American president to the 1994 one in which South Africans stood in long lines to elect Nelson Mandela as South Africa's first Black president. Here's Nelson Mandela's congratulatory letter to our president-elect.

We join people in your country and around the world in congratulating you on becoming the President-Elect of the United States. Your victory has demonstrated that no person anywhere in the world should not dare to dream of wanting to change the world for a better place.

We note and applaud your commitment to supporting the cause of peace and security around the world. We trust that you will also make it the mission of your Presidency to combat the scourge of poverty and disease everywhere.

We wish you strength and fortitude in the challenging days and years that lie ahead. We are sure you will ultimately achieve your dream making the United States of America a full partner in a community of nations committed to peace and prosperity for all.

Mr. Peace has nerve. Unlike many I do not hold him in the greatest of esteem. Let us hope that Barak does not make the same mistake and sell out his people as easily. Truth and Reconciliation Commission my ass. Here is where your loved one is buried now forgive and move on. I would never find peace or forgiveness for the man/woman that killed my child.