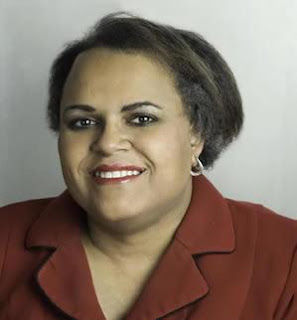 TransGriot Note: Y'all know how much I love and admire Dr. Marisa Richmond of Nashville, who is one of my role models as to the type of Phenomenal Transwoman I wish to project to the world.

Well, 'Number Two', as Dawn and I call her (our inside joke about being the only African-American IFGE Trinity Award winners and the order in which the three of us received them) was recently honored with the 2008 Baltimore Black Pride Chairwoman's ICON Award for her years of work toward advancing GLBT-issues.

Congrats, sis. The story from Nashville's Out and About follows.


Marisa Richmond, president of the Tennessee Transgender Political Coalition (TTPC), has received the 2008 Baltimore Black Pride Chairwoman's ICON Award for her years of work toward advancing GLBT-issues. She accepted the award in Baltimore, Md., on Oct. 11.

The Chairwoman's ICON Award is a special honor personally selected by the Chair of the Board of Directors. Cydne Kimbrough, this year's chairwoman, said she chose Richmond for the award because of her tireless dedication to the GLBT community.

The Chairwoman's ICON Award is a special honor personally selected by the Chair of the Board of Directors. Cydne Kimbrough, this year's chairwoman, said she chose Richmond for the award because of her tireless dedication to the GLBT community.

"It has been my personal goal to select individuals who are stellar examples of what we all can be, no matter our race, gender identity/expression , or sexual orientation, " Kimbrough said. "Dr. Richmond was a clear choice as she is educated, powerful, humble, kind and not only one of the best in the GLBT community of color - she is one of the best in the country and possibly the world."

The ICON awards are given to community members and allies who work to improve the lives of GLBT people of color in Baltimore and throughout the U.S. Icons are nominated by community members.

Richmond said the award reassured her of the importance of her work.

"I've started to realize that, especially for African American transgender people, I've become an important role model because they don't see a lot of positive role models out there," Richmond said.

Aside from her work with TTPC, Richmond also serves on the board of directors of the National Center for Transgender Equality and is on the Sexual Violence Prevention Planning Committee of the Tennessee Department of Health.

"The transgender community doesn't need to look far to find a leader that is always putting us first," said TTPC member Carla Lewis. "Many times Marisa Richmond stands for us when we won't stand for ourselves."

Richmond is a former Board Member of the Tennessee Vals in Nashville, and has also served on the Boards of American Educational Gender Information Service (Board Chair from 1996 to 1999), the International Foundation for Gender Education, National Transgender Advocacy Coalition, Tennessee Equality Project and Nashville's Rainbow
Community Center.

Since April 2006, she has been a regular panelist on Out & About Today on News Channel 5+ in Nashville and has been a columnist for Triangle Journal News in Memphis since February 2008.

Richmond said she has had a commitment to hard work since her childhood.

"I was raised to stand up for what I believe in and never to accept second class status," Richmond said. "My parents were politically active and they encouraged me to be so, too, because everyone can make difference." 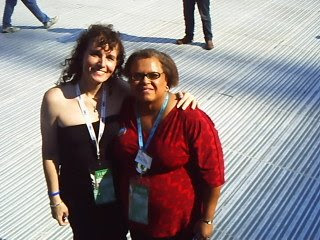 Earlier this year, on Super Tuesday, Richmond became the first openly transgender person to win an election in Tennessee when she was elected to the Davidson County Democratic Party Executive Committee. One month later, she became the first African American transgender person to be elected as a delegate to the Democratic National Convention from any state, and is currently one of two Tennesseans on the National LGBT Steering and Policy Committee of the Obama for America Campaign.

"She put a face on the transgender part of LGBT and has continued to drag the transgender community kicking and screaming into the open where the rest of the world can see that we deserve to be respected for our humanity just like everyone else," Lewis said.
Posted by Monica Roberts at 1:01 AM