The Big East Catholic basketball only schools (The Catholic 7) bailed to form their own conference.

They subsequently negotiated a deal to keep the Big East name, the contract for the basketball tournament at Madison Square Garden and also depart today.

Boise State and San Diego State after initially agreeing in November 2011 to join the league, backed out after all the turmoil and mass defections started and decided to stay in the Mountain West Conference.

Boise State filed a lawsuit in April to avoid paying the $5 million exit fee to the Big East/AAC.  The Bi East/AAC is also embroiled in litigation with West Virginia, Pitt, and Rutgers.   They recently settled out of court with TCU for $5 million. 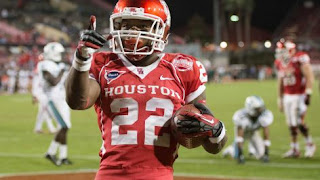 Louisville, Pittsburgh, Syracuse and Rutgers also said see ya to the Big East to head to other conferences.  Pittsburgh and Syracuse are headed to the ACC starting today, Louisville will join in 2014 and Rutgers is headed to the Big Ten in 2014.   Notre Dame, which was a Big East member for all its other conference sports except football also joined the exodus for the ACC and that affiliation starts today.

Since the Big East name departed with The Catholic 7, the conference in now named the American Athletic Conference.  The good news is that the automatic BCS football berth remains, which is why UH left C-USA to join the AAC in the first place, is still available to play for this year until the new plus 4 playoff structure starts in 2014. 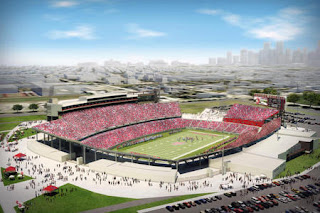 There was just as much drama and activity on Cullen Blvd.in the runup to this day.

During the middle of a 2011 season in which UH was on the brink of being a BCS buster in football Kevin Sumlin shadily was negotiating on the eve of the C-USA title game against Southern Mississippi to scurry off to Texas A&M.   The Cougars were upset 49-28 in that game and went from playing in the Sugar Bowl to the Ticket City Bowl where they flattened a scandal plagued Penn State team to finish 13-1 .  . .

Tony Levine became the UH head coach after Sumlin's departure and had a disappointing injury plagued 5-7 season that included a scary November 2012 incident in which cornerback DJ Hayden nearly died on the practice field.   Robertson Stadium was torn down after the Cougars played their final game in it, a 40-17 victory against Tulane on December 3.

Construction started in February on the new $105 million football stadium after Robertson was demolished and the site cleared.  In the interim the Cougars will play their inaugural AAC season home football games at Reliant Stadium until the new 40,000 seat on campus football stadium opens in August 2014.

UH's new collegiate conference home will have 10 teams in 2013-14, which is two short of what you need to host a football conference title game.   AAC members in this inaugural season are Cincinnati, Connecticut, Houston, Louisville, Memphis, Rutgers, SMU, Temple, UCF and USF.

After Louisville and Rutgers leave the AAC, East Carolina, Tulane and Tulsa will join the American for all sports in July 2014 and Navy will join as a football only member in July 2015.

A new chapter in the Cougars collegiate sporting history starts today and we UH fans and alums can only hope it will be a successful and less drama filled one.