'Girl Meets World' Is A Go!

For those of you who grew up in the 90's, one of the iconic shows for you was Boy Meets World.  And yes, it was one of my guilty pleasure shows I enjoyed watching.

During its seven year run on ABC from 1993-2000 you got to follow Cory Matthews and his friends coming of age stories from their middle school years to their time at John Adams High and into college.

You watched Cory's friendship with Topanga Lawrence blossom into a romance in which she eventually became his wife, but not without some bumps along the way including a breakup and her family's move to Pittsburgh.   You also got to watch Topanga as she morphed from being an eccentric hippie child to a mature, calm and collected young woman.
Rumors began flying in late 2012 about a possible spinoff to the show focusing on Cory and Topanga's 12 year old daughter Riley and her best friend Maya. 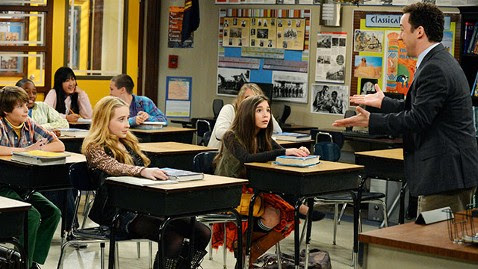 The rumors and buzz got even more intense when Danielle Fishel and Ben Savage confirmed in November 2012 they would be reprising their Cory and Topanga roles for the pilot episode and Rowan Blanchard and Sabrina Carpenter were cast for the roles of Riley and Maya.

William Daniels, AKA Mr. Feeny also made an appearance in the pilot episode.

As for as the other Boy Meets World cast, they are in various stages of talks with the producers to eventually make appearances on this show.   The producers have give the old cast members open invitations to participate in the new show if they wish and wanted to save some surprises for that first season.

But the producers, Disney and the old cast are united in their determination to have Girl Meets World be the same type of quality show for this generation of kids that they enjoyed doing for the kids of the 90's.

Unlike Boy Meets World, which was set in Philadelphia, Girl Meets World is set in New York. Cory is now a history teacher with two of the students he is teaching being his daughter and Maya.

As for Topanga, she transitioned from a law career for life as an entrepreneur running a popular pudding shop that serves as a hangout for Riley and her friends.

Riley will also have an older brother named Elliot and a potential love interest of her own in Tristan Friar, a transfer student from Texas.

Production on the series has already started in Los Angeles with the first episodes scheduled to air on Disney Channel in 2014.

Here's hoping Girl Meets World does justice to the original show and lasts just as long as the original did.
Posted by Monica Roberts at 5:00 AM