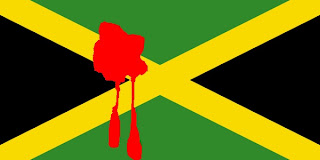 Dwayne Jones, a 17 year old Jamaican teen was at a street party on July 22 in the Irwin community near Montego Bay wearing femme attire at the time and dancing with a cis male.

The teen was chopped, stabbed and shot to death.  The body was dumped in bushes along the side of the Orange main road where it was subsequently discovered at 5:00 AM local time.

Jamaican police are stating that patrols will be increased in the area, but that doesn't help Jones, the teen who is dead now because of the rampant homophobic and transphobic ignorance of the denizens of Irwin.

And speaking of rampant transphobic ignorance, it's starting to run wild in the comment threads and there needs to be people pushing back in them.

Jamaica Forum of Lesbians, All-Sexuals and Gays (J-FLAG) said they have documented nine cases of TBLG people killed in Jamaica this year and have reported a 400% rise in homophobic attacks since 2009.

Jamaican churches have also gleefully increased their anti-gay rhetoric and fiercely lobbied against an effort by Jamaican Prime Minister Portia Simpson-Miller last year to repeal the odious British colonial era buggery law fueling much of the anti-LGBT animus in the island nation.

A looming conscience vote in the wake of a review of the buggery law is also drawing the ire of fundies.

And Maurice Tomlinson of J-FLAG told it like it T-I-S is.  “Despite this ongoing slaughter of innocents, many Jamaicans, including attorney-at-law and senior member of the opposition political party, Ernest Smith, categorically deny that gay Jamaicans are under attack,” Tomlinson said in an LGBTQ Nation interview.

To the Jamaican flag waving transphobic haters I say this:.

Buy a vowel and get a clue that sexual orientation and gender identity are not the same.

Neither do you have the right to kill someone because you DON'T like their outward gender presentation not matching with the genitalia between their legs.

I thought Jamaica was an independent nation. Amazing the haters are still quoting a jacked up British colonial era law with no basis in science or reality and hiding behind the Bible as their justifications for their anti-gay and anti-trans hatred with tragically violent outcomes to our trans and SGL peeps on the island who happen to be facing the brunt of it.

In a country where the murder rate stood at 1,087 in 2012 equalling to 21 Jamaicans per week, that is 3 Jamaicans murdered each day and this does not take into consideration the nearly 300 killed by the police, the killing of a cross dressing teen is not as significant as some people with their homosexual agenda would want to make it seem. Jamaica has a problem with crime. see it for what it is and not what your selfish minds want it to be. The mother of that teen is mourning a lost, yes, but so is 2 other mothers each day. Jamaica needs to fix the problem of its people having a blatant disregard for the lives of other human beings whether or not that human being is gay, straight, man, woman, young or old. This is not a problem of homophobia, it is just a murder rate much too high...