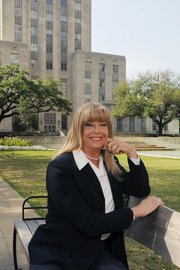 Mel Wymore isn't the only trans person running for a city council seat on a large American metropolis in this 2013 election cycle.

Jenifer Rene Pool is making her second attempt at winning a Houston City Council seat this fall by running for the City Council Position 3 At Large seat.

On Thursday Jenifer's making her official campaign kickoff announcement in front of the building where the Houston trans community hopes she'll be heading to for the next two years starting on January 1, Houston City Hall.

Friends! Please join us this Thursday, July 11th at 3:00 PM in front of City Hall as Jenifer Rene Pool announces her campaign for Houston City Council At Large Position 3. Come out and support Jenifer and our community all while taking part in a truly historic moment in our City's history.

You can help us spread the word by "liking" and "sharing" this photo. Also, in case you have not already done so, please take a second to endorse Jenifer by clicking here -->http://goo.gl/12oHw.

So Jenifer's not only trying to win this race, she would get to make a little history in the process, too.

Best of luck Jenifer and hope this run for office ends with a more successful conclusion for you.
Posted by Monica Roberts at 9:00 AM