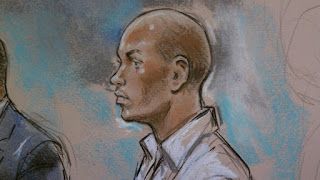 While the DC and national trans community were justifiably pissed off at the light sentence former Washington DC Metro cop Kenneth Furr got for shooting at three Black trans women with his service revolver in that ugly August 2011 incident, Furr was quietly filing papers to appeal what legal punishment he did get.

Furr filed papers in DC Superior Court back on February 11 to appeal his sentence of three years and 30 days in prison, 100 hours of community service and a $150 fine with the prison time suspended.

He has already paid he fine and is now serving three years of supervised probation.  As part of his sentence, Furr was ordered to register as a gun offender, undergo substance-abuse treatment for alcohol and anger-management therapy, and stay away from the five victims of the car shooting and the area the incident occurred, bounded by New York Avenue NW, 7th Street NW, Massachusetts Avenue NW and North Capitol Street NW.

Jason Terry of the DC Trans Coalition said in a February 20 interview with Metro Weekly ''I think this reaffirms the suspicion that Kenneth Furr remains a threat to our communities, and lacks both the remorse and self-awareness necessary for people in our communities to be able to feel they can safely go about their lives,'' Terry wrote. ''Somehow Furr and his legal team keep making him out to be the victim here, and that's just not a narrative that we can allow to stand.''

Terry also said in the February interview he hopes that if Furr's sentence somehow ends up being revisited, the appellate court will mandate ''some sort of transformational justice process, so that Officer Furr, his victims and the impacted communities can find a path forward, free from continued fear.''

Will be keeping my eye on this case, too.  But based upon how this Furr case played out and the one involving Darryl Willard, it's easy to see why the District's trans people are pessimistic that justice will be served when it comes to gun incidents with trans women as the targets.