And for once, it isn't the odious Chuck Knipp and his Shirley Q. Liquor 'act' I'm slamming for trying to do it.

This latest episode of white person who didn't get the memo that white people doing blackface drag is never appropriate is Toronto drag queen Daytona Bitch.

He has his draws in a knot because he was fired from a gig during the recent Toronto Pride for performing in blackface.

He was allegedly imitating Miss Cleo from the Psychic Hotline commercials of the late 90's-early 2K's at the Crews & Tango  nightclub in Toronto.

The June 24 performance generated a lot of angrily contentious discussion on Twitter with the clueless Daytona Bitch trying to defend along with his fans the jacked up performance.

"I asked a couple people if it was offensive because it’s not blackface in my eyes,” Daytona Bitch says. “I went to theater school. I know what blackface is. It was not a minstrel show. I was doing a character. 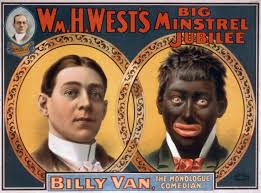 Whitesplaining segment over, time for Moni to school your azz right now on the subject.

Sure it's not offensive or blackface in your eyes because you're wallowing in vanillacentric privilege.  And if you claim to know what blackface is, why did you go ahead with that performance anyway?

Obviously none of those people you asked in that club were Black Canadians, because they would have told your vanillacentric privileged behind what I'm about to say in this post right now.

Blackface has been used to denigrate, demean and dehumanize Black people across the African Diaspora for over 180 years.  It's why African descended people in North America have highly negative views toward it that haven't and won't change even in the second decade of the 21st century.

It's also why North American Black people have a zero tolerance policy toward any manifestation of white people in blackface, whether it is maliciously racist or not.

We don't care if you are a drag performer, a model doing a high fashion photo shoot, somebody doing so as a badly thought out Halloween costume or drunken white college kids perpetuating negative stereotypes of African descended people in the name of fun and frivolity.   You need to get it through your vanillacentric privileged minds blackface is offensive to African descended people and there is no justification in our chococentic minds for doing so.

And you knew it too, which is why you and your fans are trying to whitesplain this away. BTW Daytona, since you got paid for that performace, it does qualify as blackface since you made money off the dehumanization of my people.

You don't get to tell my POC community as a member of the ethnic group that exercises power in this society (deleteriously at times to my community) what is or isn't offensive.  We have repeatedly told you Blackface is one of those things that IS offensive to us on both sides of the 49th parallel, so hear us loud and clear when we say that.

And don't even try to bring up the Wayans Brothers White Chicks movie, Tyler Perry as Madea, Martin Lawrence as 'Big Momma', Eddie Murphy in Norbit, Whoopi Goldberg, or RuPaul's sellout azz into this conversation in order to defend blackface.

Don't bother parting your lips to say that tired, 'we need to lighten up about it' line or try to claim 'it's a costume' either.

My people and my culture are not costumes you put on for your or your people's entertainment.

I repeat, white people doing blackface, whether it is malicious or not is NEVER acceptable so don't do it unless you like being called out about it.

Class dismissed.
Posted by Monica Roberts at 12:00 AM