#GivingTuesday may have already passed, but you don't need a specific day to donate to one of the organizations who has taken on the mission of building trans political power and getting trans people elected to public office.   people

So how about giving some of those hard earned dollars to an organization that is building trans political power and doing so in a spectacular way like Trans United Fund?

They have a proven track record in terms of not only getting our people elected like Minneapolis councilmembers elect Andrea Jenkins and Phillipe Cunningham, but provided the critical support that got Danica Roem through her contested Democratic primary and during her successful race to topple the self proclaimed 'Homophobe in Chief' Bob Marshall from his VA House of Delegates seat.

While Trans United Fund's focus is on trans candidates, they did provide the critical support to help three trans supportive school board candidates in Palatine, IL beat back a heavily funded right wing attempt to gain control of the D211 school board and win their races.

With the 2018 election cycle fast approaching,  Trans United Fund needs to replenish their funds so that they can be in a stronger position to help the trans candidates who request their endorsement. 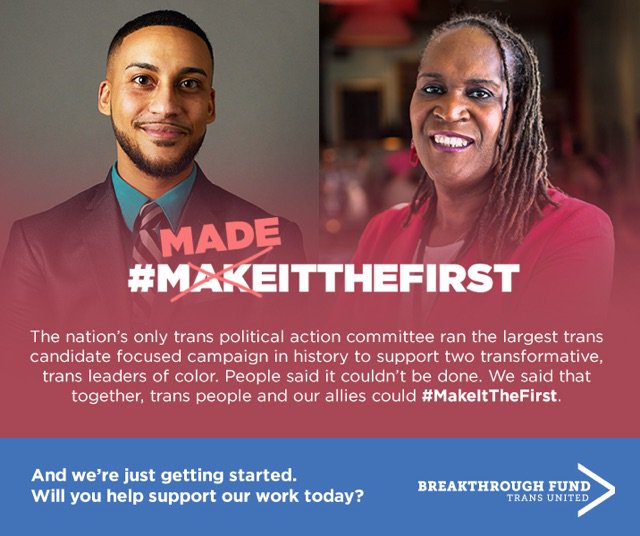 Trans United Fund is seeking to raise a total of $10K  $5,000 for Trans United Fund and another $5000 for the Breakthrough Fund  PAC that helped power Andrea, Phillipe and Danica to their historic election wins.

Will you consider donating and helping Trans United Fund reach or exceed that goal?  $20, $10 and $5 donations add up.   If you can give more, that's fine, too.   But bear in mind trans fam and allies, that if we want to see more trans representation in our city councils, community courts, judicial benches, state legislatures or Congress, running a winning campaign takes money.

In 2018 we already have some trans persons who have declared they are running for public office. If they ask for the Trans United Fund endorsement, TUF wants to have the resources available o help them win.

So please consider making an investment in TransUnited Fund, since November 2018 will be here sooner than we realize.
Posted by Monica Roberts at 10:00 AM