Went to visit my friend Samantha yesterday who was taken to Memorial Hermann in the Texas Medical Center after having several grand mal seizures on Tuesday morning. 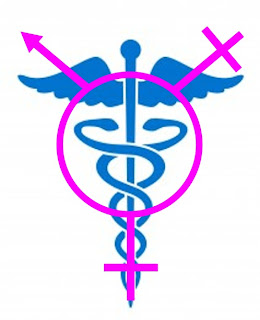 One of the fears we have in Trans World is when we must access the medical establishment while trans is being mistreated.

We trans peeps have to access the medical world for things besides transition related health care for things such as flu shots, general healthcare exams, mammograms and pap smears   Some of us have had to access emergency health care as well for broken bones or other issues.

Some of us have experienced everything from being repeatedly misgendered by hospital personnel to being hit with outright refusals of doctors and other medical personnel to treat us based on their faux faith based prejudices.

Medical transphobia can have deadly consequences for us as we transpeeps and our allies are all acutely aware of and has been documented in the 2015 US Transgender Survey.

23% of the respondents in the USTS survey have declined to see a doctor or seek medical treatment because of the fear of being mistreated as a transgender person.

When Samantha recounted to me what had transpired since she was admitted to Memorial Hermann, combined with the misgendering I personally witnessed,  pissed me off.  It also pissed off Kandice Webber, Mo Cortez, Ana Andrea Molina and a long list of people in the Houston advocacy community.

The fact this is happening during Trans Awareness Week in what is considered one of the best medical centers in the United States adds another level of pissivity to what is going on .

Samantha has been repeatedly misgendered by doctors, nurses, and the staff.  The Patient Advocate, after being requested by Samantha Tuesday, wasn't grasping the gravity of the situation and didn't see her until Kandice, who when not doing activism is a supervisory nurse, put them on blast about their piss poor care of her.

The question that is running through all of our minds as we battle for Sam to have the respectful trans competent healthcare she deserves is  how man other Houston area trans people have suffered through the same crap?

To borrow Kandice's words to the Patient Advocate and other as we witness continues screwup in relation to Samantha's care, "Don't apologize for your mistakes, do better!"

But it is blatantly obvious to me and everyone else who has visited Samantha that Memorial Hermann in the Texas Med Center has a serious case of virulent transphobia, and it's a problem that needs to be rectified immediately.