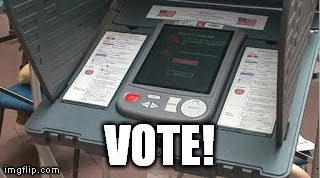 If you missed your opportunity to early vote, don't get upset because Election Day is tomorrow..

You'll just have to handle your election business at your usual precincts instead of the early voting locations that were open until November 3.

While this is a Houston centric election reminder post, I am keenly aware of the fact there are people running for office across the country in critical elections, including four trans candidates in Minneapolis, New York State and Virginia looking to make history tomorrow..

Our Lone Star State ones for governor, lieutenant governor, the Lege and other critical positions in our state government aren't happening until next year.   It'll be 2019 for the city of Houston elections .

But we do have control of the HISD school board up in this election cycle with six seats up for grabs,  two HCC boards seats , five Houston city propositions and several state constitutional amendments that require you to say YEA or NAY to.

Who are those endorsed candidates?   Glad you asked.

And for the first time the Caucus has also come out with an official position on issues pertinent to our community.

If you're wondering how to vote on those Texas Constitutional Amendments,  here's analysis from Daniel Williams, one of the smart people I pay attention to when he talks about Texas politics and the Texas Legislature.

So consider this a practice run for 2018 and 2020 and go handle your electoral business.
Posted by Monica Roberts at 10:30 AM