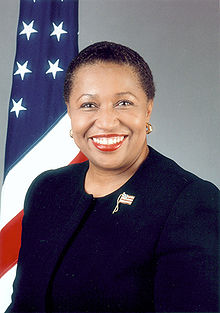 It was on the date in 1992 that Carol Moseley Braun became the first African American woman and the first Black Democrat of any gender elected to the US Senate, representing the state of Illinois.

She unfortunately only got to serve one six year Senate term, and it took until 2016 to have our Second African American female senator elected in the person of Kamala Harris.

It's also Friday, and y'all know what that means.  It's time for me to call out so fools for this week's edition of the TransGriot Shut Up Fool Awards.

Honorable mention number three is John 'Papa John' Schnatter, who made the ridiculously racist comment that Black NFL players protesting during the national anthem for social justice are responsible for his sagging pizza sales.

Naw boo boo, look in the mirror as for who the guilty party is as to why nobody's buying your crappy pizza.   You're only the latest fool to learn that supporting Trump is bad for business and your career.

Honorable mention number four is a joint one for Donna Brazile , Elizabeth Warren and the Berners.

Brazile falsely accused Clinton of once again 'rigging' the  2016 Democratic Primary.   Elizabeth Warren then threw Hillary under the bus by co-signing the statement , that caused drama in the left wing blogosphere all day as Berners seized on the remark and call a woman that they racistly attacked last year a hero/

Now all of them are silent because the comment was debunked.   All this unnecessary drama because one person want to spice up her book sales, one wants to pander to the Berners, and the Berners still wanna hate on Hillary and anyone who dares call out St Bernard of Sanders their lord and political savior and points out the inconvenient for them truth he sucked as a candidate.

News flash to the Berner wing.  Bernie STILL lost to Hillary, and no conspiracy theory you can come up with will change that 2016 primary result.

Now can we get along and move on to the 2018  midterm elections and do the work that reality based America is counting on us to do? This week's Shut Up Fool winner in a week crowded with contenders for the honor is Energy Secretary Rick Perry.

Perry embarrassed himself and Aggies everywhere by saying that increased use of fossil fuels can prevent sexual assault and the jury is out on the science behind climate change..

Ugh, my head hurts just even trying to quantify and make sense of the massive level of willful ignorance and WTF level stupidity that went into those statements.