Why Y'all Mad About The 'Black Panther' Movie?

One of the movies I'm looking forward to  seeing next year is the long awaited for me and the rest of Black America Black Panther movie starring Chadwick Boseman.

The trailer was released a few days ago, and elements of the white community are losing their damned mind over it on social media as the trailer became the third most watched one in movie history.

What bothers some of y'all so much about seeing a Black superhero who is the king of the technologically advanced African nation of Wakanda? 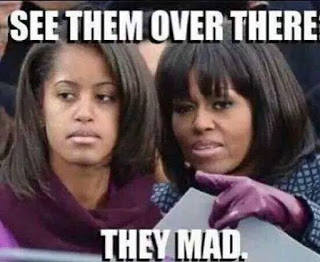 I haven't seen elements of White America lose their mind over a movie centering Black folks since White Man's Burden came out in 1994.  That movie starred Harry Belafonte and JohnTravolta in a world in which the societal script was flipped and it was Black peeps on top of the societal totem pole and white peeps living in the 'hood.

I enjoyed trolling peeps as they walked out the theater.  I said to one guy "What's wrong?  You can't handle this fictional world?   This is mine and non-white peeps everyday reality."

Moving on from that trip down Moni Memory lane and back to discussing Black Panther.

Y'all need to get over it because this superhero exists, has since 1966 and predates the founding of the Black Panther Party, FYI, and yeah, T'Challa is a badass who for a minute was married to Storm.

Looking forward to seeing the Dora Milaje kick some serious behind as his royal security guards,

I'm also looking to see how T'Challa's kid sister Shuri, the future Black Panther and Queen of Wakanda, is portrayed.   .

So y'all need to chill with the ridiculous assertion being bandied about online that Black Panther is 'racist'.   Black Panther is a fictional African character based in Africa, and y'all doing over the top tripping about it.

So hate on haters.   Come Black History Month 2018, I and other Black panther fans will be going to and having a lot of fun at the local multiplex watching a superhero that looks like us.

Now if they'll get that third installment of The Best Man on the silver screen ASAP I'll be doing a happy dance at the snack bar.
Posted by Monica Roberts at 12:00 AM