Not happy to hear about the situation that took place in Nebraska in which a soccer team was disqualified from a tournament before they were to play in the finals of it because in the president of the Springfield Soccer Club's words, for "looking like a boy."

Meet 8 year old Milagros 'Mili' Hernandez.   Mili loves soccer, has been playing for three years and currently plays for the Azzuri Cachorros Chicas club team in Omaha, NE.  Mili is so skilled at the game that she plays with the 11 year old squad, and she and her teammates were playing in a tournament organized by the Springfield Soccer Club.

After playing three games on Friday and Saturday and advancing to the semifinals of the tournament that were to be played on Sunday, they were shocked to find out they had been shadily disqualified from the tournament.

The reprehensible chain of events started when an anonymous complaint was made by someone telling tournament officials that a boy was playing on a girls team.

Hmm, I suspect the anonymous complainer must have been a supporter of a suburban based melanin free team, but back to the story.

Mili's coach Mario Torres got a phone call early Sunday morning informing him that Mili had been listed as a boy on the roster, but instead of resolving the issue, disqualified the team. 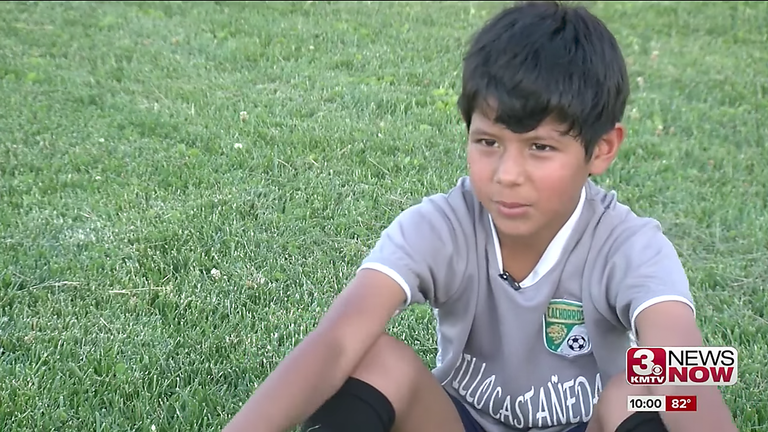 Torres called Mili's family, and despite them bringing and presenting multiple forms of identification proving that Mili was female, the tournament director refused to reverse the incorrect decision.

Torres suspects that the twin evils of racism and gender discrimination are at play here.

"We had already paid to play.  We'd played three games.  Why was this not resolved before the semifinals?" asked Torres. "Even if this was a mistake, they did not need to humiliate her or kick the entire team off the field."

The president of the tournament hounded me all throughout the tournament.  He disqualified three of my four teams for bogus reasons. He caused a lot of problems and for that reason, we feel this had to do with race."

The story has gotten the attention of US women's soccer legends Mia Hamm and Abby Wambach and tennis legend Billie Jean King, who have sent messages of support to Mili via Twitter.  Hamm has invited Mili to come to one of her soccer camps.

And Mili is thankful for the support she has received.  She's also going to continue to wear her hair short.

But it still doesn't bring back the opportunity for Mimi and her team to prove on the field that they were the best team at that tournament.