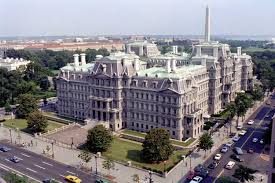 The reason I'm in Washington DC is for the first ever LGBT Innovation Summit.that is starting as you read this at the Eisenhower Executive Office Building of the White House.

Over the next four hours me and my fellow Summit panelists will get to witness a program that features some dynamic speakers, a panel discussion, and some participation time carved out so we can share ideas, collaborate with fellow Summit attendees and ask questions.

And I get to put my reporter hat on and witness the inaugural event.   While this isn't the LGBT White House Pride Reception with fancy presidential invites, an appearance from the POTUS and FLOTUS, it is a fascinating event that I'll get another opportunity to do some networking at and see at least two people I know in Dr Kortney Ryan Ziegler and Geena Rocero.

Then again, who says the POTUS may not pop in to say hello?

So what's on tap for the LGBT Innovation Summit Program?  .


The Summit will include:
*An armchair conversation with Megan Smith, Vice President, Google[x], moderated by Leanne Pittsford , founder of Lesbians Who Tech
*Remarks by Geena Rocero, Founder, Gender Proud, on how technology is empowering trans people, introduced by Taryn Miller-Stevens, Founder, GET//OUT
*An interview with Hillary Hartley, Creative Director, 18F, by Erie Meyer, Senior Advisor to the U.S. Chief Technology Officer
*A Call to Action by Tim Gill, Entrepreneur & Founder, Gill Foundation
*Time for “Elevator Pitches” where YOU will have the opportunity (in less than 30 seconds!) to talk about your innovative work, ask for help or resources, or share your Big Idea. This is an opportunity to spark collaboration and harness the expertise and energy in the room.
*A panel discussion on challenges and opportunities facing LGBT communities, featuring senior leaders from the White House Office of National AIDS Policy, U.S. Department of Agriculture, Out2Enroll, and UCLA's Williams Institute.

The Summit as I mentioned is starting at 1:00 PM EDT (now) and will conclude by 5:00 PM EDT, followed by a networking reception hosted by the Gill Foundation in the Indian Treaty Room.

So yeah, I'm definitely looking forward to meeting the folks I don't personally know and having a chance to network with them.
Posted by Monica Roberts at 12:00 PM