Shut Up Fool Awards-Stupidity Is Too Damn High Edition 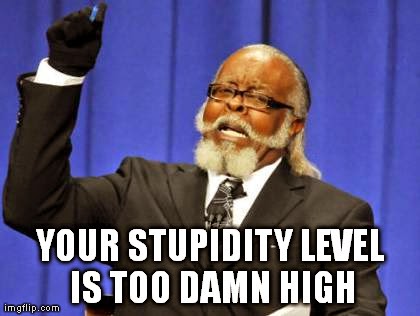 It's Friday, and you know what that means TransGriot readers.  Time to call out this week's fool, fools or group of fools for this week's TransGriot Shut Up Fool Awards.

Every week I shine the TransGriot spotlight on the people or groups that exhibit outrageous hypocrisy, mind numbing stupidity, overbearing arrogance, and   jaw dropping ignorance for your perusal.

And now, let's get busy revealing this week's fools.

Honorable mention number one we go across The Pond for in British TERF Julie Bindel who asserted being gay is a choice.  I know more than a few peeps in the GL end of the community who have some elegant and not so elegant things to say to her behind on that topic, so I'll let them call her out..   I'll have fun with her the next time she says something transphobic.

Honorable mention number two is a favorite for this year's Shut Up Fool of the Year Award in Rep. Louie Gohmert. (R-TX).  Gohmert Pyle racistly opened his mouth to charge that the POTUS would protect women from 'hundreds of thousands of immigrant rapists'

Who is going to protect us from your hundreds of thousands of hours of clueless and racist jibber-jabber?

Honorable mention number three is Rep Renee Ellmers (R-NC) for her idiotic comment about men needing to bring policy discussion down 'to a woman's level'.

hmm, methinks you've had too many washes, sets, and cranial rinses at the GOP Stepford Salon.

Honorable mention number four is ExxonMobil, who got busted by HRC for lying about their non discrimination policies.

Honorable mention number five is the National Library of Singapore, which announced they would be destroying all pro-LGBT books    Still won't change the fact that TBLG people exist in your nation and everywhere else around the world.

This week's Shut Up Fool winner is Tea Klux Klan member Scott Esk, who is running for the Oklahoma legislature as a Teapublican and had comments resurface this week that gays should be stoned to death.  .

Instead of criticizing him, we should be thanking him for being candid enough to reveal he's a homophobic bigot.   He also proves once again why I loathe libertarians even more than I do Republicans.