Why I Haven't Had Many Kye Allums Updates Lately 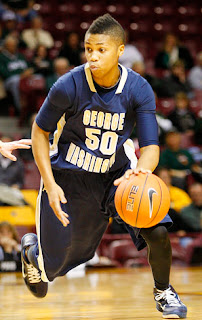 The entire trans community was pleased when we found out we were going to have a reason to pay close attention to the 2010-11 NCAA women's basketball season besides seeing if UConn's long winning streak would be extended.

George Washington University junior guard Kye Allums came out as trans, and we looked forward to hearing him speak about the issues of being a transitioning Division I student athlete and seeing him play.

But after suffering a concussion during a game several weeks ago, note the lack of appearances on the floor much less the silence coming from GWU.    He has only played in eight games this season.

The Washington Post published a story in which Kye's mother asserts that he has been cleared to play by the team doctor, but has not been allowed to play.   In addition, they are restricting his access to the media allegedly because GWU has agreed to give Oprah an exclusive interview with Allums.

If that part is true about the Oprah interview, about damned time she interviewed an African-American transperson.   We'll see if it happens.

But back to the developing Allums story.  GWU AD Jack Kvancz denies it and GWU spokeswoman Candace Smith is quoted in the Washington Post story as saying   "GW has offered Kye guidance and support on multiple fronts. At no time was the university involved in any discussion about compensation for any interview requests."

Okay...my intuition is telling me the truth is somewhere in the middle on this, but you know the eyes of this trans Texan will continue to be trained in this direction..