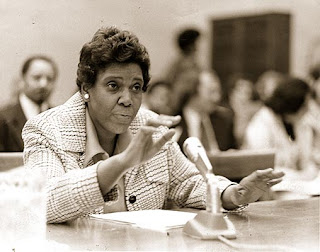 It would stand to reason that a trailblazing political figure like Barbara Charline Jordan would be born on George Washington's birthday.    One of the things I have lamented about Texas' slide into conservafool madness is that we haven't produced national political leaders with her stature ever since.


As you longtime readers know, I have much love for Barbara Jordan and a lot of my attitudes toward government were formed by watching her actions and listening to her eloquent words as she represented me as a Texas state Senator and later in Congress .

If you ever hear me mention the letters WWBD, she's who I'm referring to when I say it.

Every time I hear somebody say there's no such thing as an honest politician, Barbara Jordan's memory comes to my mind when I tell that person that's bull feces.  Barbara Jordan was so ethically rock solid that when Ann Richards became the governor in 1990, she appointed her as the head of her Ethics office that she established in the wake of the scandal ridden Clements administration

Yesterday would have been her 75th birthday, and I'm pausing for a moment to think about her remarkable life.   She was the first African American woman and first elected to the Texas State Senate since Reconstruction.   The first Southern Black woman ever elected to Congress.   She served on the Judiciary Committee during the Watergate Hearings.   The memorable 1992 DNC keynote speech.  She was considered by Jimmy Carter as a vice presidential running mate in 1975 and by President Clinton for a seat on the US Supreme Court.

Even in death she was a trailblazer when in 1996 she became the first African American to be interred in the Texas State Cemetery.

There are some of us who still refer to the 18th Congressional District, the one currently held by Rep. Sheila Jackson Lee and once held by Mickey Leland, the man who succeeded her as 'Barbara's Seat'.

Texas, and the nation could stand to have more leaders like her.