If you noticed Fox Noise and the conservafool movement cranking up the propaganda volume on the Right Wing Noise Machine a little louder today and this week, it's because today would have been the 100th birthday of their patron saint.

For African-Americans who are not derriere kissing conservatives, we can't stand Saint Ronald of Reagan's racist behind and could care less..

But we will hear for the rest of this centennial year Saint Ronald of Reagan's name invoked from now until the 2012 election and beyond in their never ending campaign to hate on President Obama.

Regan wasn't all that as a president, and his azz was racist on top of it.    The 'Reagan's not racist' defenders will point to his signing of the MLK, Jr holiday bill as evidence, but we all know Ronnie opposed that bill and only signed it because he knew Congress would override his veto of it.

Explain Reagan starting his 1980 presidential campaign in Philadelphia, MS, and inserting the racism dog whistle line 'I believe in state's rights' in his speech.   Philadelphia, MS for you historically challenged people  was where civil rights workers Chaney, Goodman and Schwerner were killed in 1964 in one of the more heinous crimes of the civil rights era..

Reagan labeled Nelson Mandela's African National Congress as a terrorist organization while standing with South Africa's apartheid regime   He was opposed to the Civil Rights Act of 1964 and the Voting Rights Act of 1965 and as president tried to weaken the VRA.    Reagan was behind the 1981 effort to reverse the policy of denying tax-exempt status to private schools that practice racial discrimination and grant an exemption to Bob Jones University. 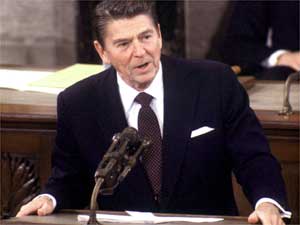 He appointed an African American conservative in 1982 to head the EEOC who changed the way the EEOC handled its business.  Who was that conservative?    Clarence Thomas. .

So no, like millions of other African Americans who despise him, you will not see me or many of us celebrating his birth because he was an avowed enemy to our hopes and aspirations as American citizens.

He set this country on a political course that has been detrimental to our national unity, made this country more mean spirited, callous, debt ridden, selfish and racist, and set the stage for the have mores getting a disproportionate share of our national wealth.

So why would any thinking person want to celebrate that?