Canada Allows Trans People To Openly Serve- What's Wrong With The US Military? 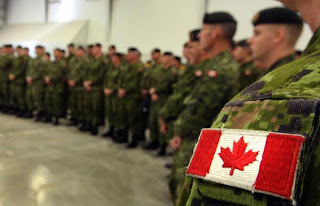 As the existence of the Transgender American Veterans Association is irrefutable proof of, transpeople have proudly served in all branches of our nation's military.

Christine Jorgenson was in the Army before transition. Much of the early leadership in our trans community was provided by people who took the lessons they learned in serving our country and translated them into organizing and serving our community when their service to their particular service branch was done.

While we still fight tooth and nail in the United States just for the right to serve our country openly, there are six other nations on the planet that allow transpeople to serve in their armed forces.

Australia, Israel, the Czech Republic, Spain and Thailand not only allow transgender soldiers to serve but also support them through diversity programs.   The other nation that does so is our northern neighbor..

While the Canadian Armed Forces have been dealing with the issue of trans soldiers since Sgt. Sylvia Durand transitioned in 1998, they only just got around to making the necessary policy changes.

Back in December the Canadian Armed Forces issued a policy manual change that chronicles how they will accommodate trans soldiers. Soldiers, sailors and air force personnel who undergo a gender change have a right to privacy and respect around that decision, but must conform to the dress code of their target gender..

Cpl. Natalie Murray recently completed a gender transition and serves as an IT tech at a Canadian Armed Forces base in eastern Ontario.   She said during a CBC radio interview, “There shouldn’t be any issue at all. We’re just regular people doing a regular job, the same job as everybody else.”


So what's holding up the United States from doing so?   Transbigotry?  Lack of info?   The fact it's a rabidly conservative testosterone driven segment of our society?

I find it bitterly ironic that the US military will recruit white supremacists or functionally illiterate people but a transperson is considered 'administratively unfit'.   Go figure that one out.


Cpl. Murray was dead on target.  We're just patriotic Americans who want the opportunity to not only serve in our country's military, it's past time for our armed forces to allow qualified transpeople to serve just like any other citizen that wishes to sign up for military service.