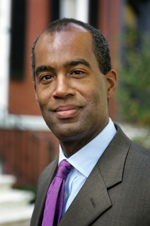 You'll see this sellout popping up regularly on MSNBC or other media outlets zealously defending the Republican agenda, anytime the conservafools have put their feet in their mouths and got caught uttering another racial slur or his former bosses Dick Cheney or George W Bush needs defending.

Ron was born in Palo Alto, CA and worked for Senator George Allen (R-VA) and a senior advisor to John Kasich (R-OH) before join Dick Cheney's staff in 2001.    He joined Dubya's staff in 2002 and served as his special assistant until 2004.


Ron pops up as a GOP 'useful fool' whenever CNN or some non Fox media outlet needs a cookie chomping Negro to pimp conservative talking points on race and class issues..

And if you think Moni's being harsh, I'm not the only person in the Blacxkosphere who feels that way about Christie.

Ron Christie, another tool for the GOP that wants to oppress me..