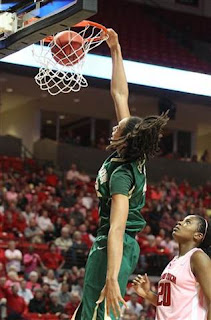 The Baylor Lady Bears played a tough Valentine's Day game against the Texas A&M Aggies and traveled to Lubbock to face a Texas Tech Lady Raider team that was itching for another upset of a top ranked team after knocking off  number 20 ranked Iowa State.on Tuesday.

Brittney Griner got her first dunk of the season, 15 points and six rebounds, but she and her number one ranked teammates shot a season low 25.9% and got slammed by the Lady Raiders 56-45 for their first loss in Big 12 conference play..

It was 24-2 Baylor's first loss since they fell to UConn in November and snapped their 21 game winning streak.   The Lady Bears will probably lose the number one ranking as well when the new women's basketball poll comes out.


Oh well ladies.  Better to lose a game now than in the NCAA tournament next month.
Posted by Monica Roberts at 12:00 PM