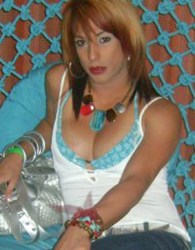 Ayala faced the judicial music for his crime earlier today and was sentenced to 111 years in jail by Justice Jesús Peluyera.

Good, it's a start.   A century plus 11 years in jail.   But sadly, it won't bring back Ashley for her family, the customers that depended on her hairstyling skills or the folks who loved her..

Santiago’s mother, Carmen Ocasio, was reported by Primera Hora as tearfully saying during the sentencing that  "this pain will last for the rest of my life"