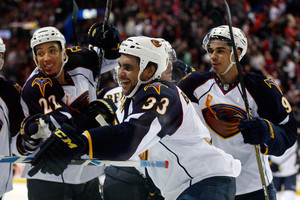 I like watching hockey and one of the first games I attended as a child was the World Hockey Association inaugural game featuring the Houston Aeros and the Howe family squaring off against the Chicago Cougars.

Like any sport that is played in North America, despite the perception that it is a white man's sport, hockey has also been influenced by the creativity and presence of  the African descended people who played it.

The Nova Scotia based Coloured Hockey.League was the forerunner of the younger and white dominated National Hockey League that wasn't founded until 1917.  According to the book Black Ice, many of the things you see in the modern game in terms of the speed of play, the acrobatic goaltending styles to the slapshot created by Eddie Martin of the Halifax Eurekas were innovations created by Black hockey players

It wasn't until 1958 when Nova Scotian Willie O'Ree became the first Black player to break the color line in the then six team NHL when he joined the Boston Bruins and played in his January 18 debut game against the Montreal Canadiens.

But this bit of sporting Black history slipped under my radar.   The Atlanta Thrashers became only the second NHL team since the  2000-01  Edmonton Oilers to start five Black hockey players.

The ATL has a 31% African American population, and a large concentration of middle class affluent African Americans.   With rumors flying that the team may be headed for the same fate as the Flames, the previous Atlanta based NHL team that moved to Calgary in 1981, an ownership that admits they've been trying to sell the team since 2005 and attendance numbers that  rank 28th out of the 30 NHL teams, the Thrashers are seizing on an opportunity to introduce hockey into an untapped market for the NHL in terms of African Americans in a bid to keep professional hockey in the ATL..

As Thrashers management knows and I discovered in 1972, once you see a hockey game live, you're hooked.  The team is not only highlighting that factoid in advertising geared toward Black media outlets in the Atlanta area, Thrashers leading scorer, Minnesota native and NHL All-Star defenseman Dustin Byfuglien was interviewed this morning on the nationally syndicated Tom Joyner Morning Show.  The team is also reporting anecdotal evidence of increasing numbers of African Americans in the stands at Philips Arena as the word spreads about the Thrashers in the community and their efforts to grow the game pay off.. 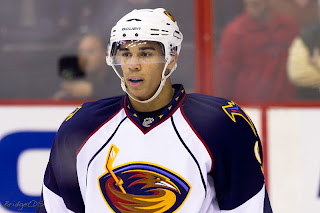 The 19 year old Kane also has the distinction of being the highest drafted African descended player in NHL history when he was selected as the number 4 overall player picked in the 2009 NHL Draft.

The Atlanta Thrashers have made history a few times this NHL season.   There have been a few occasions this season in which a Thrasher goal and the two assists on the play setting up the goal were tallied by Black players.


But if they are going to draw more fans in the ATL period regardless of ethnicity, they will need to step up their on ice play.   They are at the time I compile this languishing in the NHL's Southeast Division in fourth place with a 25-26-10 record.   Only the top eight teams in each conference make the Stanley Cup Playoffs and they are number 11 in the Eastern Conference standings four points out of the last Eastern Conference playoff spot

Here's hoping they get on a winning streak that gets them a playoff spot and I get to see one of the few soul powered NHL teams playing for the Stanley Cup..