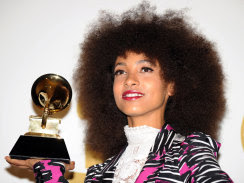 There were a lot of upsets in last night's 53rd annual Grammy Award ceremony, but one of the surprise winners was 26 year old jazz instrumentalist and singer Esperanza Spalding in the Best New Artist category.

The Portland, OR born musician graduated from Berklee College of Music in 2005.  She was immediately hired by the institution as an instructor, becoming at age 20 one of the youngest instructors in the institution's history.

I became aware of her last year when she performed at the BET Honors show done for His Royal Badness when she sang his hit 'If I Was Your Girlfriend.' .

She also performed at the 2009 Nobel Peace Prize Ceremony and concert.   She was chosen by President Obama himself as part of the tradition of having one artist chosen by the Nobel laureate to perform in the Oslo concert.

So with this pedigree, was very pleased to see a musician get rewarded with a Grammy, and was more than a little pissed to hear how the Justin Bieber fans threw a temper tantrum after she deservedly won that category. 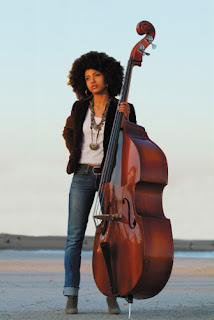 Spalding's Wikipedia page was defaced after her Grammy win.   Misstatements and taunts were added to the site and then quickly removed. After a sentence noting her victory, for example, a user added the statement, "Justin Bieber deserved it go die in a hole. Who the heck are you anyway?"

In other places, the singer's middle name was changed to both "Justin" and "Quesadilla" and her Grammy win was written up with the addendum, "Even though no one has ever heard of her! Yay!" At the end of her biography, one user wrote, "Biber 4 Lyfe."

Grow up you bigoted juvenile delinquents.   When Justin Bieber can say he toured with Patti Austin, performed on PBS' Austin City Limits, graduated from Berklee College of Music, and is 1/100th of the musician that Spalding is, then I might begin to care about his career.

Until then, stop hatin' and listen to some real music for a change.