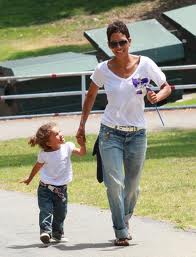 35 year old French Canadian model Gabriel Aubry and Oscar winning actress Halle Berry split up almost a year ago and the most visible result of their relationship was their gorgeous 3 year old daughter Nahla.

A nasty custody battle is brewing over their daughter, and I'm chuckling over a report in TMZ that Aubry gets pissed when people refer to his daughter as Black.

Thanks to the residue of the 'one drop' racial classification rule from slavery and the way society is still dealing with the toxic waste residue 150 years after the end of America's original sin, anytime a white person either fathers a mixed race child or gives birth to one, that child will be considered Black by society.

Hell Gabriel, all you had to do to see that one coming was talk to Nahla's grandmother and mother.

Halle is biracial, just like her daughter, but she let you know a long time ago how she and society sees her.

Gabriel is alleged in a TMZ report about have gone off the deep end about people and reports calling Nahla black. 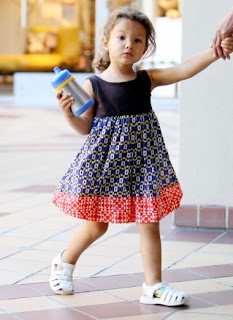 Sources connected with the former couple tell TMZ ... whenever Gabriel would read a story about Nahla that referred to her as "black," he would go off, insisting his baby was white. We're told Gabriel would tell Halle and others they should demand a "retraction" when such references were made regarding his daughter.

As TMZ previously reported, sources tell us Gabriel has called Halle the "N" word -- and one woman previously involved with him referred to him as a "borderline racist."

If the TMZ story is accurate and it's true Gabriel's tripping about that and being a racist jerk at the same time, he needs to buy a vowel and get a clue.

That long list of biracial women in the previous paragraph that I posted includes several Grammy winning singers, award winning actresses, a Miss Universe, an Olympic athlete, models, and an author who are also seen as Black women..

We are not even close to being a post-racial society as much as people would wish it to be so.    The election of our biracial president who white Americans long ago let know they didn't consider him anything but Black and have treated him that way since November 4, 2008.

But those same white Americans had a cow when he checked off African-American only on his census form.

So Gabriel, get used to something we call the 'one drop rule' and get used to your daughter for the rest of her life being considered a Black woman.