The three surviving members of the 555th Parachute Infantry Battalion, Walter Morris, Roger Walden and Clarence Beavers, AKA the 'Triple Nickles' were honored in a Pentagon ceremony today.

At that time for African-American military personnel, 'serving your country' meant being herded into service units. They endured racism and suffered the indignity of seeing German prisoners of war getting better treatment than they did.

The 555th got its start with Morris and a group of African-American soldiers serving at Ft. Benning, GA. It's the US Army base dedicated to training our paratroopers.

As an exercise in building up their self-esteem, Morris and his men began to emulate the paratroop training on their own time they witnessed the white trainees go through when they were done with their other duties.

"We went to the calisthenics field and we knew the routine because we had watched them. ... We started with the five-foot platform where they jumped into the pit,"

"The most interesting thing of that was the replica of a C47 plane -- the body of it -- and the students went in there and sat down and they pretended to be paratroopers," Morris said.

They didn't know as they performed their extracurricular training that the War Department was considering forming an all Black paratroop unit. When they decided in February 1943 to form the 555th, Morris soon became its top non commissioned officer. 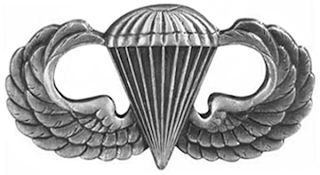 Twenty soldiers started the training and on February 18, 1944, 17 soldiers graduated and earned the Parachutist Badge. As the unit's first sergeant, Morris was the first man of the 555th to be pinned with his parachutist wings.

The 'Triple Nickles' decided to spell it differently from "nickel" to make sure people knew they were unique as the first African American combat paratroop brigade.

They wanted to be part of the combat jumps planned for the D-Day invasion, but White commanding generals were loathe to deal with the additional complications of integrating the all White 82nd and 101st Airborne Divisions and declined to use them.

However, the Triple Nickles would make their contribution to the war effort in an unexpected way.

Reeling from the fire bombing raids devastating Japanese cities, the Japanese attempted to strike back by releasing incendiary bomb laden balloons that the North Pacific winds carried to the US West Coast.

The intent was to set fires in cities such as Seattle, WA or San Francisco, CA, but the balloons started huge forest fires. However the Japanese didn't know what the balloons were accomplishing. The War Department had the twin goals of wanting the fires put out and ensuring the news about what the Japanese balloon bombs were accomplishing stayed secret.

The U.S. Forest Service needed help putting the fires out, so Morris and his Triple Nickles packed up their gear and were flown to Oregon to take part in a secret mission called Operation Firefly.

The Triple Nickles were given quick training and became the first "Smoke Jumpers" -- firefighters who parachuted into rugged mountain terrain with nothing but shovels, axes and basic supplies.

Their mission meant they had to get the fires under control or out before they could return to base. The Triple Nickles performed 1,200 jumps in accomplishing their mission before the war was over. 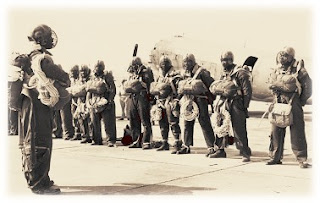 But because Operation Firefly started out as a secret, the Triple Nickle's pioneering contribution to protecting the home front and to history was all but lost.

Today's ceremony lifted the veil of secrecy that kept their pioneering roles out of the history books and ensures that the 555th Parachute Infantry Battalion earns its rightful place in the proud history of pioneering African American military units.

Walter Morris also had the honor of pinning the paratrooper wings on his Iraq War veteran grandson.
Posted by Monica Roberts at 7:00 PM