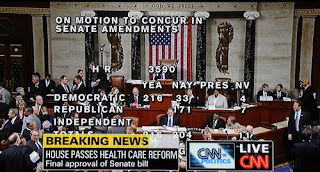 While I was in Oneonta I watched the contentious debate before the House vote on the health Care reform bill late Sunday night-early Monday morning.

While I'm not happy about it and want nothing less than universal single payer health care (or Medicare for all), it's a starting point.

If we liberals all agree that Medicare for All is a worthy goal, then our first order of business is to show up to the polls en masse in November. We need to defend the legislators that braved Tea Klux Klan attacks to vote for the bill and show that there's a political upside to passing groundbreaking legislation, not a penalty.

These folks will face unrelenting levels of ignorance from now until November. Some have been spat on called derogatory names, and had bricks thrown through their office windows. The brownshirt tactics need to be repudiated. 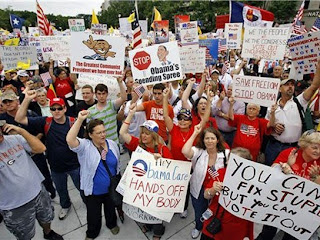 We need to stand up and fight just as fiercely for our value and ideaas just as fiercely as the Tea Klux Klan does for their misguided ones. We would ideally like to do it with more dignity and class than they do.

But if they want to act like nekulturny WWE wrestlers, so be it. Bring on the political brass knuckles, the sharp tongued rhetoric and kick their behinds.

Liberal does not mean wimp, and we need to reinforce that fact to these America hating fools on a regular basis. We need to stop being scared of stupid people, lead and start being the 'A' students that were mandated in 2008 with cleaning up the mess the conservative 'D' students left. 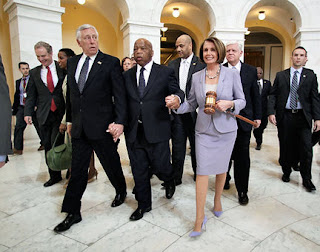 We also need to regularly point out, compare and contrast the superiority and fairness of liberalism to their failed, selfish and predominately monoracial political philosophy.

Leadership means you have to make some tough choices that are not politically popular. Let us as liberals and proud Democrats always make sure we are on the side of people who seek justice and fairness.

When America is at its freest and fairest, its because it practiced and espoused liberal values. We regress as a country to dark, sinister places when conservative selfishness rules the day. 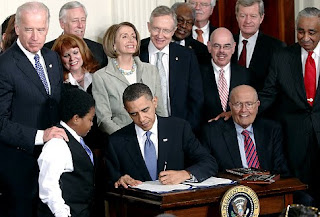 The bill that passed and was signed by President Obama Tuesday tells the world that we're tired of being the only country without universal health care coverage for its citizens. We're tired of being 49th in health care issues and are finally joining the rest of the industrialized world to emphatically acknowledge what they did decades ago.

Health care is a right, not a rich person's only privilege.
Posted by Monica Roberts at 4:00 PM