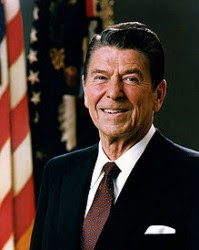 Once again our conservafools are trying to memorialize the late Ronald Reagan, and their feverish attempts to do so before his 100th birthday in 2011 are becoming more irritating.

A proposal to put him on Mt. Rushmore was laughed out of existence, and he already has his name attached to Washington National Airport (which I still refuse to call Reagan National), an aircraft carrier and one of the largest federal buildings in DC.

Personally I'd put JFK or FDR on there before Reagan.

In addition to the conservaplanning for a yearlong 100th anniversary birthday celebration, efforts are underway in California and Nevada to name mountains after Reagan. I can guarantee you that those 2011 celebrations of his birthday won't see anything but Black sellout faces at them.

He has introduced legislation which would redesign the 50 dollar bill to replace President Ulysses Grant with Reagan. McHenry's rationale for it is claiming every generation needs heroes and it is time to honor President Reagan by placing him beside Presidents Roosevelt and Kennedy. 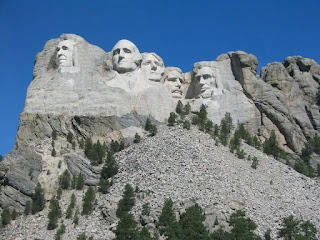 He may be yours and white conservative America's hero, but as an African-American, I have no love for Reagan's racist behind. That distaste for Reagan was cemented when he made that infamous 1980 'I believe in state's rights' speech during his presidential campaign in Philadelphia, MS.

McHenry goes on to say Reagan transformed our nation's political and economic thinking.

Damned sure did, for the worst. Do the words 'voodoo economics', 'trickle down economics' and 'trillion dollar deficit' ring a bell?

The bill has been sent to the House Financial Services Committee, and Rep. Brad Sherman (D-CA) isn't ready to jettison Grant for "someone whose policies are still controversial."

"Our currency ought to be something that unites us." said Rep. Sherman.

Thus isn't the first time the GOP has tried to stick Reagan's face on our currency. When they had control of Congress, in 2005 they tried to put Reagan on the $50, but the bill never made it out of the House Financial Services Committee.

They attempted to replace Franklin D. Roosevelt with Reagan on the dime, but Democrats rose up and nixed that proposal.

A proposal to put Reagan's mug on the $20 bill drew objections from Tennessee lawmakers who didn't want Andrew Jackson removed from it.

In a letter to his congressional colleagues, McHenry wrote, "President Reagan is indisputably one of the most transformative presidents of the 20th century. Like President Roosevelt on the dime and President Kennedy on the half dollar, President Reagan deserves a place of honor on our nation's currency." 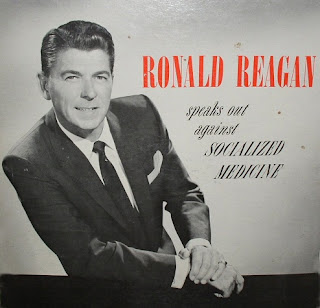 No, he doesn't. Rep. McHenry. Vanilla flavored peeps that share your political philosophy may believe that nonsense, but much of the American public doesn't share the same warm and fuzzy feeling about Ronald Wilson Reagan as you do.

I and many people saw his 'transformative presidency' in the 80's as a less than pleasant time in which the United States became more mean-spirited, more bellicose, more racist, and more divided politically and socially.

So no, definitely don't want Reagan's mug on Mt. Rushmore, much less any US currency.
Posted by Monica Roberts at 4:00 PM