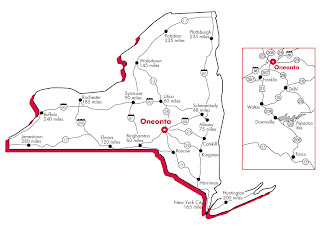 I've had an enjoyable day and a half in Oneonta, NY hanging out with Dr. Lobdell, her students and various faculty members on campus while doing my Trans 101 presentation. But now it's time to say goodbye and head back to Da Ville.

I'm up and hitting the road with Dr. Lobdell at 9 AM to make the enjoyable 60 mile run west on I-88 back to Binghamton. I have an 11:00 AM EDT US Airways flight to catch that will start my journey back to Louisville and get me back here by 2:30 PM.

Or so I thought.

It rained off and on in the Oneonta area Monday along with most of the northeastern US. Little did I suspect it would cause a chain of events that would snowball into a frustrating travel day for moi. 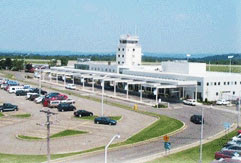 The first clue this might be a trying travel day was arriving at a fog shrouded Edwin Link Airport around 10:10 AM. It was starting to lift from the runways, but I discovered at the check in desk that the fog had delayed my aircraft which was coming from Philadelphia.

Dr. Lobdell offered to stay, but I told her I'd be okay and sent her on her way back to Oneonta after thanking her for everything she'd and everyone else had done to facilitate my successful on campus presentation.

After clearing TSA security and losing my 4 oz. container of cocoa butter, I settled into the lobby area and awaited the arrival of our delayed airplane which was an 11:15 AM ETA. 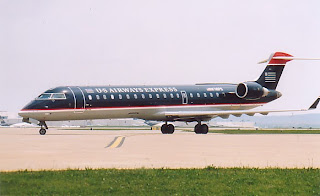 At 11:15 we not only didn't have a plane at the gate, we find out thanks to a gate announcement that it returned to Philadelphia and canceled there. That set off a stampede for the ticket counter and I ended up tenth in line. I'm also kicking myself at this point because I'd left my cell phone in Louisville.

I'm already mentally going through my options as I await my turn. I know there's only one more flight to Philly from Binghamton and it's going to be grossly overbooked. There are only two other carriers that fly out of that airport and not only are they booked solid, one of them is weight restricted. 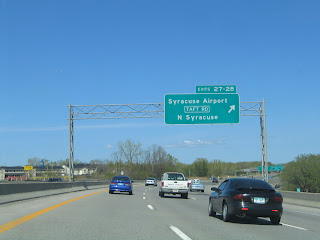 The flight doesn't leave Syracuse until 3:10 PM, so the US Airways personnel call a cab to get me there. I have plenty of time to make the connection after enduring a white knuckle cab ride in a misty rain that increases in intensity as we get closer to Syracuse.

I arrive in Syracuse and have to clear TSA security again, then wait one and a half hours for my bird to arrive from Washington.

After a bumpy 52 minute flight I arrive at DCA and have to sit for another two hours because my flight to Da Ville doesn't leave until 7:40 PM. Since this is the first time I've been to Washington National since 2000, I decided to do some exploring and see what was in the food court. 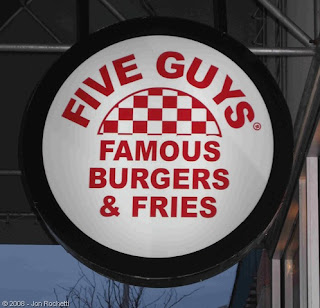 That's when I discovered there was a Five Guys in the terminal and made a beeline for it. After ordering a bacon cheeseburger and fries from the friendly Ethiopian descended sister working the register, I now know after receiving that greasy brown paper bag containing my food why President Obama and everybody in DC raves about the place.

Chowing down on Five Guys along with that wide ranging conversation I had with Dr, Lobdell this morning was the only righteous thing that was happening for me.

The buzzard's luck struck again after we boarded the flight. While waiting to take off a plane several spots in front of us broke down and had to be offloaded and pushed to the maintenance pad. It caused a traffic jam that delayed our takeoff 20 minutes.

I had planned to catch the TARC from the airport home and as I nervously perused the schedule discovered the bus I needed to catch in order to connect downtown was leaving the airport at 9:46 PM. We were originally scheduled to get to Louisville at 9:30 PM, but that would now take a minor miracle and the pilots exceeding Mach numbers to pull into the arrival gate at that time.

As I feared we pulled into the gate at 9:45 PM, and by the time I got off the plane and sprinted for the airport exit it was 9:50 PM, which meant that the bus was already headed off airport grounds and speeding northward towards downtown.

Next bus wasn't leaving until 11:11 PM. I decided to see if the US Airways counter was open so I could get them to spring for the cab ride home since I was now seven hours past the time I was originally supposed to get back to Da Ville.

I discovered that the counter had been closed since 7 PM.

I ride the next bus downtown anticipating that I'll be able to get a cab at the stand near 4th Street Live, but that didn't pan out either.

By this time I'm so thoroughly frustrated I just start walking home from downtown. That took another hour and I finally walk into the house at 1:05 AM.

But at least I got my exercise in, but not the way I planned it.

Let's just hope my upcoming trip to the ATL goes a bit more smoothly.
Posted by Monica Roberts at 12:15 AM