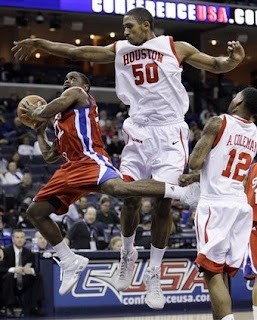 I'm also happy that my beloved University of Houston Cougars have made it to the finals of the C-USA Tournament and will be playing regular season champ UTEP again.

While I'm counting down to the early morning start of tomorrow's game, let's take a moment to see who exhibited their own version of March Madness and championship level stupidity.

This week, it's not even close. Glenn Beck wins it. The Mormon convert pissed off EVERY church liberal and conservative and even his own Mormon one by attacking churches that practice social justice by calling it "code language for Marxism".

Social justice is a core tenet of many faiths, including the Black church.

Glenn Beck, shut the hell up fool!
Posted by Monica Roberts at 10:00 PM