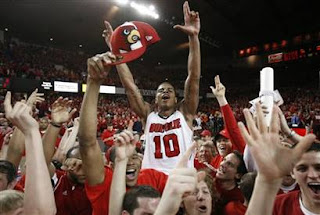 Freedom Hall is located on the grounds of the Kentucky Fairgrounds just 5 miles south of downtown Louisville and not far from the U of L Belknap campus.

The building has been the basketball home of the University of Louisville Cardinals since 1956 and seen a lot of sporting history. It has hosted six NCAA Final Fours between 1958-1969, Muhammad Ali fights, NCAA tournament regional finals, conference tournaments and the Kentucky high school state basketball championship from 2001-2003.

With the impending fall opening of the new downtown arena today's game against Syracuse was the last to be played at Freedom Hall. 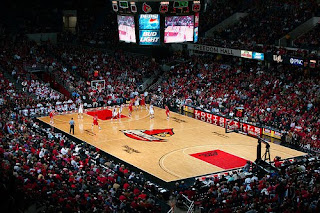 The Cards have won 82% of the games played in this building, including a January 2004 game I and Polar watched my Cougars play against U of L during the Cards last season in C-USA before they left for the Big East Conference.

He left happy that night, I didn't.

Just as the Cards won their first game in Freedom Hall, an 85-75 win over Notre Dame, they closed out this building in style by beating number one ranked Big East rival Syracuse 78-68 for home win number 683.

It was the second beatdown they have administered to the Orange, Syracuse's first road loss, an emotional 20th win of the season for U of L and may have put the Cards in the NCAA tournament as well. 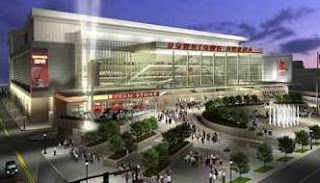 It didn't come without a struggle. The Cards trailed by eight points at the half, but rode the 4 for 4 three point shooting and 9 of 11 overall of sophomore Kyle Kuric to erase the deficit.

Kuric's career high 22 points ensured that the Cards last game in front of a record Freedom Hall crowd ended with a Cardinal victory.

The new 22,000 seat downtown arena will open this November, and Cards fans are hoping the home wins keep coming in the new building as prodigiously as they did at Freedom Hall.
Posted by Monica Roberts at 6:00 PM