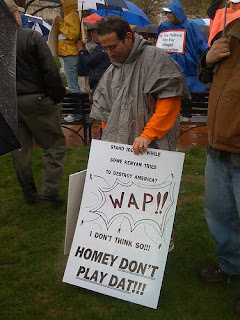 TransGriot Note: This is a petition from Color Of Change addressed to the Republican Party to get them to ride herd on their Tea Klux Klan surrogates and chill out on their condoning of racism as a political tactic.

Good luck with getting the GOP to drop the drive to become the Southern National Socialist White People's Party, but thought it needed to be posted to the blog.

It's time to hold the Republican Party accountable.

You've probably heard about Tea Party members shouting "Nigger!" at Black Congressmen during a protest in Washington, D.C. last weekend. One of the protesters spat on Congressman Emmanuel Cleaver, while another called openly gay Representative Barney Frank a "faggot" as the laughing crowd imitated his lisp.[1]

But Saturday was just the most recent example of the intolerance and hate coming from right-wing extremists this past year. At times it's been instigated by Republican leaders. When not, it's usually condoned and seen as part of a strategy to score politically. Either way, it's completely unacceptable and has to stop.

It's time to confront Republican leadership and force them to take responsibility for the atmosphere they've helped create. Please join me in signing ColorOfChange's petition confronting Republican leaders about hate and fear-mongering in their party, and ask your friends and family to do the same:

- Unequivocally condemn bigotry and hate among their supporters, and make clear that those who embrace it have no place in their party.

- Make clear that they will not tolerate fear-mongering and coded appeals to racism from officials in the Republican party, at any level.

Republican leaders publicly denounced Saturday's ugly scene, but they failed to acknowledge that this is only the latest incident in a pattern of violent rhetoric, racially charged imagery, and paranoid conspiracy theories at Tea Party rallies.[2] Many Tea Partiers aren't simply about dissent -- they use fear and hatred to assault the very legitimacy of our elected leaders. It's the worst America has to offer. Despite this, Republican leaders court the Tea Party movement while methodically supporting, exacerbating and exploiting their fear and anger for cynical political ends.[3] This is nothing less than a betrayal of American values, and it's up to us to force the Republicans to stop aiding and abetting this enterprise:

The Tea Party movement has been marked by racially inflammatory and violent outbursts since its inception a year ago. GOP leaders are trying to pass off this weekend's assaults on Congressmen Lewis, Cleaver, Clyburn and Frank as isolated incidents. But when so-called "isolated incidents" crop up again and again, a pattern starts to emerge. The examples are numerous.

At rallies held to protest tax day last year, Tea Partiers carried signs that announced "Obama's Plan: White Slavery," "The American Taxpayers are the Jews for Obama's Oven," and "Guns Tomorrow!"[4] The Republican National Committee had endorsed the rallies, and RNC Chairman Michael Steele encouraged Tea Partiers to send a "virtual tea bag" to President Obama and Democratic Congressional leadership.[5] After reports of the fear-mongering signs surfaced, Steele did nothing to distance his party from the lunatic fringe. He has even gone so far as to say that if he didn't have his current position, he'd be "out there with the tea partiers."[6]

The Tea Party's venomous rhetoric picked up steam over the summer, when angry mobs flooded town hall meetings legislators had organized as sites for rational, civil debate on health care reform. After one meeting in Atlanta, a swastika was painted on the office of Congressman David Scott (D-GA), who had also received a flier addressed to "nigga David Scott."[7] Some protesters showed up at town hall meetings carrying guns, including at least one man who was armed at an event where the President was speaking.[8] Again, Republicans responded to these tactics with silence, doing nothing to denounce them.

Our country deserves better than this. No matter what party one supports, we should all take strong action to support civil, honest, and respectful public debate. Please join me in calling on Republican leaders to denounce racist rhetoric and fear-mongering, and reject it from their party. And when you do, please ask your family and friends to do the same: